When I saw the headline 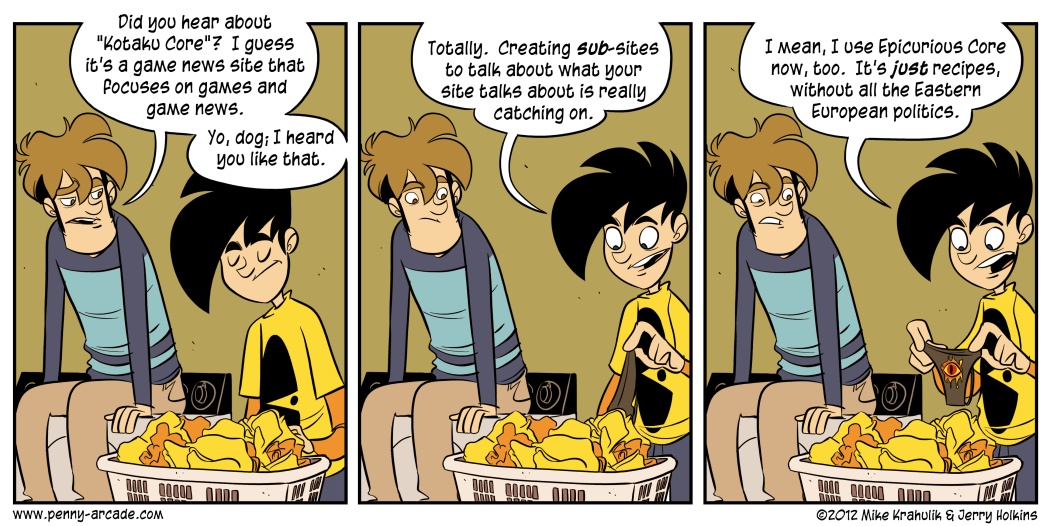 Introducing Kotaku Core, For Readers Who Only Want to Know About Video Games

it seemed like a joke almost, a headline from The Onion. Introducing what, for who? Whobida? Wojaja?

Are they creating a "kids table" version of the site because, almost on a weekly basis, civil war breaks out in their comment threads? In addition to posts about an "amazing Mario belt buckle" and deep photosets of teenaged Japanese cosplayers, Kotaku is also attempting to act as a catalyst for a broader, more inclusive gaming community. The problem (and you can absorb this from these searing, molten threads) is that not everyone wants to be catalyzed. Some of them are, to put it plainly, feral. But there are a lot of people who simply don't understand how everything became "their fault."

Splitting their site into two discrete universes seems antithetical to the site's mission, but what do I know. This atomization of culture isn't peculiar to gaming, by any means; it's more or less the inevitable result of media proliferation. You can marinate in a broth of room-temperature consensus if you want to - you can consume only the kind of news that will uphold and verify your unassailable nobility, you can join or create a community that "gets it" and feel confident that you are surrounded on all sides by the evil and ignorant Hun.

I grew up deeply religious, and so this kind of tribalism isn't a new phenomenon to me - it's a big part of why I couldn't call myself a Christian anymore. Also, I thought some premarital sex would really hit the spot. I wasn't wrong about that, either. Wow! But I remember hating people who didn't believe what I believed, precisely because they didn't believe it already, even though it was literally my job to help them understand. I had my own radio station and my own television station, and I told people I'd never met before to "get right, or get left," which basically means "go to hell." It didn't work real well.

There are certainly people with whom dialogue is not possible, or desirable; I work with someone like that. There are also people who merely disagree. We are losing the ability to tell which is which.