The demo for Mass Effect 3 comes out next month, with both single and multiplayer attached, and it will apparently leverage all the Kinect "betterness" we have been promised. I have my, um... doubts. 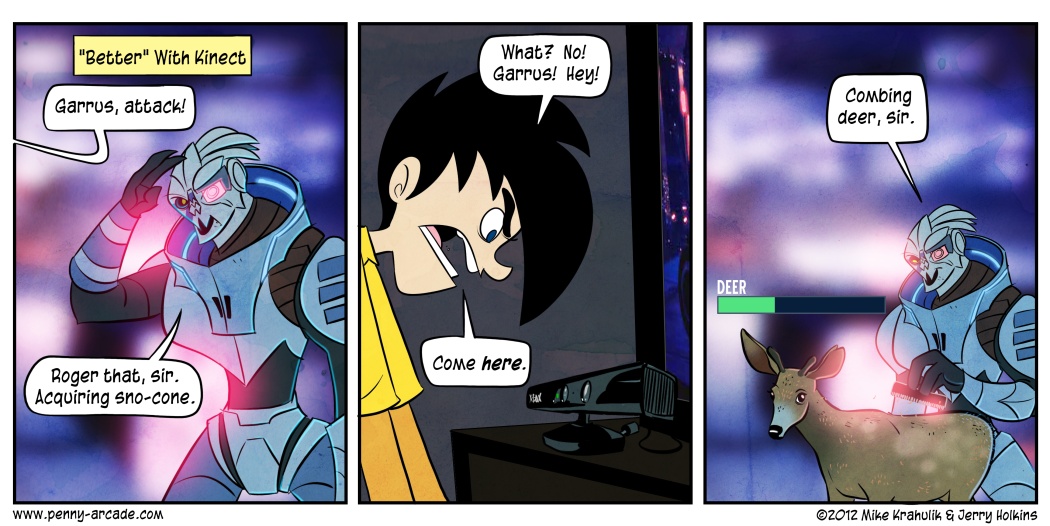 I've found that voice commands in general have lost efficacy since the abysmal, nightmare cloaked Dashboard update; I was a proponent of the Kinect in that regard initially, voice being a daily use case in my house. They've really fucked this thing up, in my opinion: I genuinely hate using this device. I want to fight the people who made it, and I can, because I know Karate. Also, I will succeed - provided they attack me with a single punch along a very specific vector. I have pamphlets I distribute to potential foes detailing all my requirements.

In videos I've seen, there are many, many functions "bound" to voice that I would never use voice for. I'm not switching guns with voice, even without the obvious and awkward pause while the game tries to differentiate my speech from that of my female heir. That's not a strong motivator. I'm not opening things with my voice. Usages like ally movement or firing specific abilities from specific characters - functions which are nested in menus and would normally pause the game - we're moving in an interesting direction. That's something that maintains flow, and someone taking a second to do what I asked doesn't wreck the atmosphere.

Features like this are an incredible opportunity to use the word "foofaraw," so I can't get too angry. I've played Mass Effect 3, though - months ago, at San Diego Comic-Con. They've gotten to to a good place, shooter wise! You'll see next month. It doesn't need much in the way of condiments.

Using my voice to choose dialogue options isn't something I would do either, but that doesn't mean it shouldn't be there. I respect that person greatly, in fact. The truth is that I can see that person from where I am, and I'm simply afraid to go all the way.