If anyone is ever wondering how not to go crazy, I have a small piece of advice: don't launch a game and sell your house and write a book and move and go to San Diego Comic-Con and launch a Kickstarter within, like two weeks. I'm running up against the theoretical limits of what stressors pharmaceutical science can effectively shield me from. 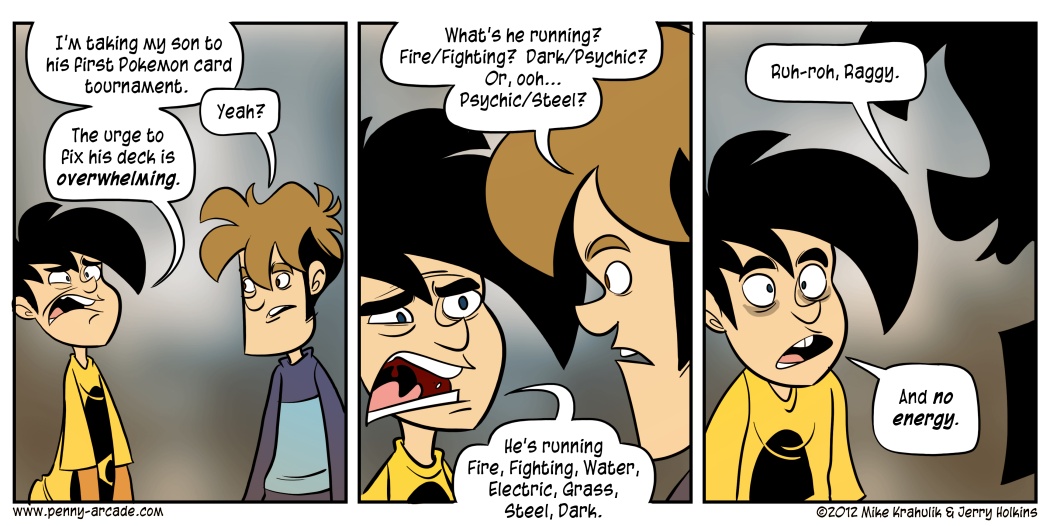 Gabriel just took his heir to a Pokemon TCG tournament, and the roiling emotions generated by this fear engine weren't something I could leave on the table. Also, Pokemon tourneys (in either form) have historically proven to be efficacious grist.

The card game itself, though ostensibly designed with children in mind, can (like any system of sufficient complexity) be transmuted into srs bzns. I spoke about it once before, when they were ass deep in it, but we had a card table in our office at one point we used to unfold when Kiko and Gabe wanted to play, and ultimately we realized that unfolding this table had become a waste of fucking time. The "meta" at that point favored a deck colloquially known as Galladevoir - somehow these decks end up with names styled after tabloid couples - and it was favored because it allowed you to play your opponent's discard pile. Kiko had functionally assumed control of the game until Gabriel broke it. I can remember the look on his face when he finally did, because there isn't much that can surprise him; in this instance, he was well and truly surprised. In essence, he had to make a deck that was (in many ways) "bad." It was mindbending. After so many rounds of relentless punch/counterpunch in deck construction, this was something wholly oblique.

The final deck he created was something he called (ahem) "Dark Dreams," whose purpose was to lull battle-weary Pokemon to sleep and then kill them. After the upset, though, some mysterious quantity had boiled out of the game; I always wondered if it had something to do with the counterintuitive nature of the win.

Anyway, here you go: The Proxy, Part One. Expect more. Well, at least one more. You know what site you're at.

For this year's PAX Prime "Storytime" (née The Keynote), we've got someone we've been trying to get hold of for awhile: Ted Price, of Insomniac Games. As though Spyro, Resistance, and Ratchet & Clank were not sufficient as a legacy, he's been on the front lines of the omnipresent question of Games and Free Speech. I want very much to see his brain on display. Not, like, his brain brain obviously. Don't cancel, Ted! It was a purely euphemistic usage.