Okay, now we're getting into it. I could explain it now, but I think it would be more fun for you to learn in your first few adventures, or in a story. I don't really like it when people do that, either - that is to say "tease cocks or cock-equivalent manifolds" - but now I know why they do it. Some of them are simply bastards, some don't actually know, but occasionally it's about delivering intent and context in a tidy package. That's what I hope is happening here. Believe me, we have every intention of paying up. 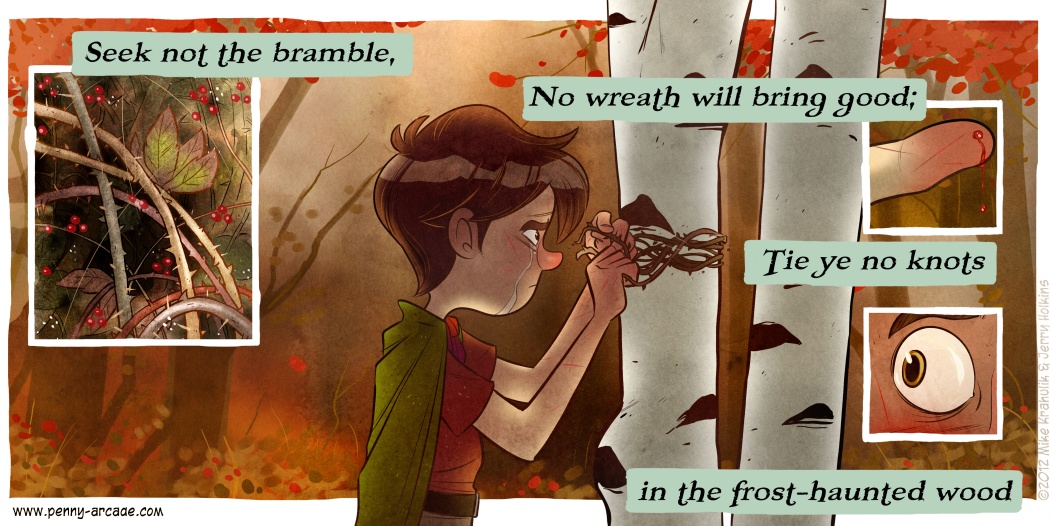 I am big, big into Etrian Odyssey Games, they're more or less what I want to play when I sit down with Intent To Leisure. They're mean and I want to be mean back. XCOM is something you can make mean with some checkboxes and aftermarket tweaks, and it essentially owns the Interpersonal Dialogue around here. The only thing these games are missing is multiplayer that compliments the thesis.

Etrian Odyssey III had multiplayer, big boss fights in the you could tackle as one barely sufficient party. And XCOM has multiplayer, also - competitive multiplayer, that is - point-buy tactics that I haven't played yet but I would be surprised if it wasn't interesting, given the rest of the package. But being able play the same map at the same time is almost too literal; these are games where being alone is a huge part of the atmosphere. Being exposed, where the decision-weight is not diffuse. XCOM is a great game to play with friends on the couch, but somebody is still pushing those buttons. They know whose fault it is.

It probably sounds weird, but I want to play alone, together: XCOM, like a guild in Etrian Odyssey, is an Organization. There's room in there for multiple people to play their own games, informed by the play of others. I want to know they're out there, working toward the same goals, and I can see their work when I return from a mission. I can put some of my scarce funds toward things that help the group, or commit resources to an ongoing fight. Scouring the world of moist interlopers or charting a sea is big work, and it reinforces that idea when you let people share the task.

Competitive asynchronous play is very, very well established, but except in rare cases I don't care about points. I do care, however, about what aliens are doing in Mozambique, or the shit that might boil up out of some 'witched hole in the ground. I don't want to share the mission, I want to share the goal. That doesn't seem impossible to me.

i didn't believe it