"New Art" is Gabriel's primary reward structure in games. If that's true - and it is, I just told you - then Ni no Kuni: Wrath of the White Witch must surely be the apex of the form. 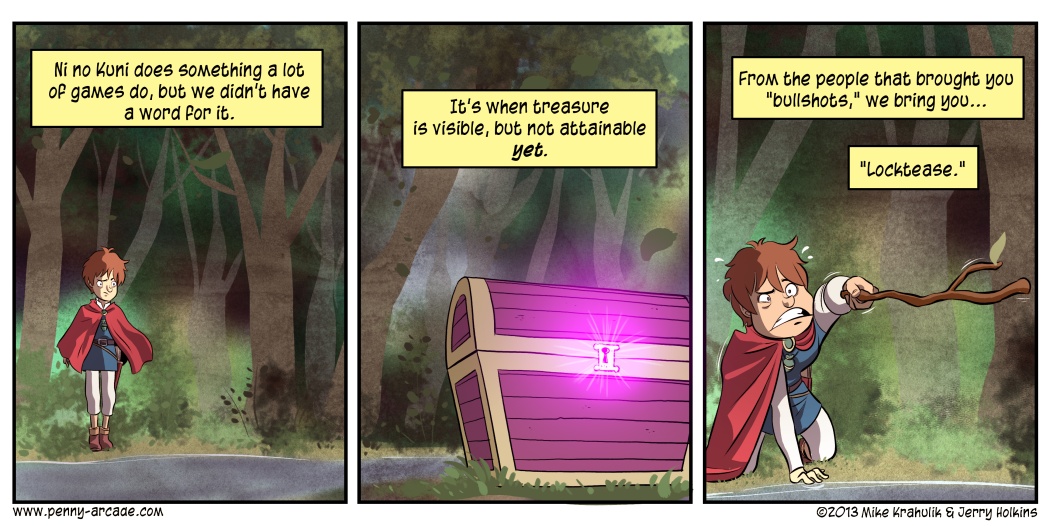 People like it or don't like it, and they have reasons or whatever. I'll tell you this much: it's a JRPG. It doesn't really feel like making concessions to some presumed-to-be-good notion of "progress" or "modernity." It is happy to be an exquisite, almost archetypal representation of the form, which is to say this is probably the least fun game to review in recent memory. There was a period, perhaps even a decade, where I would call it "malpractice" or some other lazy flourish but I have nothing but pity for today's reviewer anymore. Nobody cares if you do it right, and the rewards for doing it wrong are incredible. That's the environment we're talking about. We can't pretend to be shocked at the beasts that crawl out, all wet black leather, an errant bit of sac clinging to the jowl.

My son Elliot was enraged at the very first world of New Super Mario Brothers U, which references World 1-1 of the original SMB. The implacable goomba just comes right at you, at a very even pace, occasionally jumping with the music while Mario has his characteristically, atomically perfect icon of the "floaty platform jump." The interplay of these two things is woven into my helix - I can't not do it. Even so, at one point it was a learned skill, even if I no longer remember acquiring it.

Likewise, there are a host of JRPG structures that exist in this "assumptive" state for us that other people - children, the perpetual influx of new converts, etcetera - don't possess. We've gotta teach these people how to play these games, and if you and I aren't going to run regular workshops dedicated to the practice then maybe a Game might be a good bet; a beautiful game like Ni no Kuni maybe. Whatever problems it has, they aren't cruelties. They're not calculated to scare people away. We need as many people as possible to know the language.

On the RPG tip, Zeboyd just turned in an interview with IGN about On The Rain-Slick Precipice Of Darkness 4, and if you would "like to know more" as they say that can be easily arranged. The delicious, spongy superstructure is done, and now it's time for me to get in there and frost this thing.