Our own Galabriel was selected for inclusion into the Google Explorers Club, which might not actually be its name. I suspect there is a cool patch for your backpack, like the one you get for defeating a Gym Leader. What it means is that he was given the opportunity to travel on his own dime, and then purchase one at exorbitant cost which he'll never truly own. It's absolutely vital that he do so, though: I don't want to harangue people I see wearing them in public, I want to harangue him about them while I'm haranguing him about something else. Plus, and here's where they become a capital investment, these fucking things promise to be a strip generating engine. 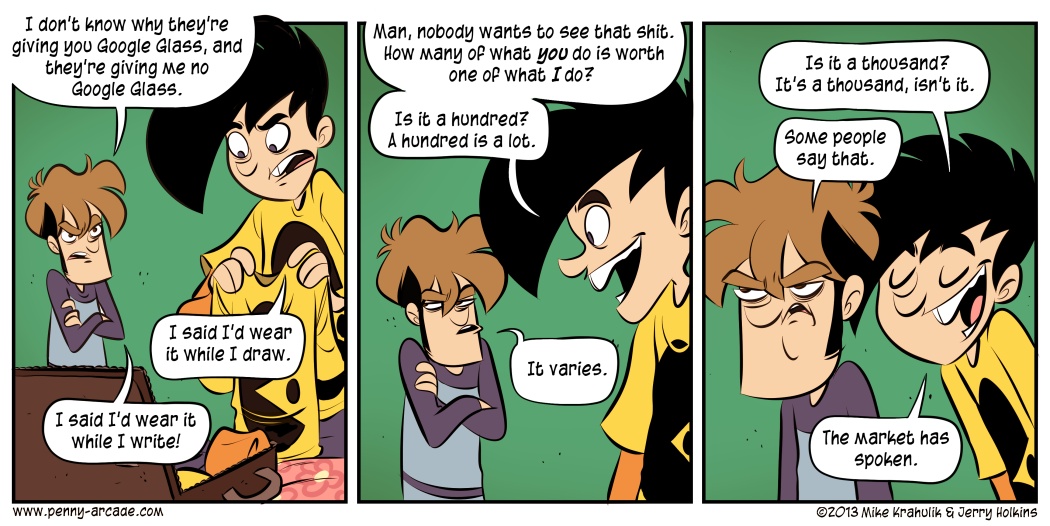 Yesterday, Microsoft decided (no doubt at Ben's fervent urgings) to break out as many facts as they felt comfortable with all at once. Some people think it's bad. It's definitely different. But I don't need to buy anything today, and I can't anyhow, so we can think about this in an abstract way if we want to. As near as I can tell, it's the first time anyone has given any thought to what happens after iTunes.

I can see how this sort of thing works, now - what my usage pattern is. Nintendo's embrace of digital delivery is the biggest story about the company at the moment, but it's rarely given stage. I was downloading, playing, and deleting games I'd purchased from my 3DS until I realized that, no; this wasn't a temporary change. I wasn't going to buy some carts and some digital. I will always by digital and I will never buy carts. Even as someone who occasionally makes his living hurling jeremiads about the coming retail apocalypse, even I was terrified by the swiftness with which this change occurred. I bought a twenty dollar SD card with 32 gigs of space, and that's it. I'll never purchase a game at retail for any Nintendo system ever again.

These purchases exist as part of the Ancient Pact, defined more or less by iTunes, whose own petty tyrannies were once the source of much hue and cry, and then people kept crying but stopped hueing, and I haven't heard a whole lot about it since. They eventually switched to MP3, but again - my usage pattern is to play music I purchase on my devices and from the Cloud. I don't back it up. The fact that it's an MP3 as opposed to an AAC is not relevant to myself or to most people. This is the lineage being invoked by Microsoft - that of the iPod, the iPad, or the Kindle, devices that more or less define digital property. The question is whether or not this is a natural fit for the Home Console usage pattern. The second question, which leaps off the first, is whether this is an exclusively Microsoft notion or if this is simply the state of play behind the curtain.

Compared to the current digital goods paradigm, a ten user "family library" which allows trade-ins, license transfer, and cloud use is fairly revolutionary. I think that if it were my job to do so, I could make a case for most of it - except, except the every-24-hours-it-calls-home-or-your-usage-is-severely-curtailed-if-not-revoked part. I don't think I could ever fix that one. I know why it's there, because they're trying to be Switzerland in a tangled thicket of rights management, but they made that system too so rhetorically they can't just point to the system and shrug. This is like when my mom used to try to argue with me about the bible using proof from inside the bible. They've got a tough-ass, motherfucking row to hoe.