Twitter is not great for actually having conversations. Sometimes I get shit on twitter from people and rather than try and have a discussion with them I make sarcastic remarks. Yay for coping mechanisms! But what does it look like when you actually do have a conversation with someone you care about? Well I had this email exchange this morning with my friend Sophie and she said it was okay to post it. I think it's interesting to see what can happen when you take something off Twitter and actually talk.

So first off, I want to say that none of what I'm about to write is meant to say you're wrong, or an ass, or anything like that. I think it's bullshit that people have been giving you such serious threats and think that they can force you to change your opinion - or that they SHOULD act in such a way. So to be ultra-super clear: your opinion is your opinion; I'm not mad at you for having it, and support your right to it.

That being said, I wanted to let you know that, when I read your words, it makes me instantly uncomfortable, because I wonder what you think of me. My thought and impression was that we were on good grounds, and I appreciated all the kind words you sent my way. But when I wasn't around, did you talk about me as a guy in drag? Those are the sorts of questions and insecurities that filter into my mind.

My identity and who I am is obviously very important to me, as it is with most people. And I know there's the whole "Well, you have to love yourself" line that people love to hand off like it's comfort food when these situations arise, but let's be honest: humans are social creatures, and others' opinions are the mirrors through which we often view our self-worth. When I'm not Sophie in someone's mind, or if "Sophie" is just pretend and the person really sees me as a guy in a dress, that's hurtful. What you've been saying about believing "a man has a penis, a woman has a vagina" is hurtful to me.

Now, again, this isn't saying I want you to stop saying what you're saying. Say your opinion and say what you believe. I wouldn't ask you any different. I'm not even asking you to consider how I or anyone else feels before you speak. All I wanted to do was let you know that someone who has met you, who has worked for you, who admires the hell out of you is hurt by what you've said. You say what you need to say, and I say what I feel I need to in order to excise this tension.

Thanks guys. Hope all is well.

To be honest with you I had no idea that you were not born a girl until just a couple months ago. When we met and hung out I always just thought you were a woman. Knowing your situation changed nothing about how I would treat you. I am happy to treat someone however they want to be treated. Wanna be a guy or a girl or a fox or whatever and I will be happy to treat you that way.

But I think that is very different from the physical reality of your human body.

I think you’re awesome and super talented. I have no idea what your body parts are and I don’t want to know. I will treat you as a woman if that’s how you present yourself to me.

I hate the idea that because I think boys and girls have different parts I am “transphobic” that pisses me off it makes me angry and so I lash out.

Sorry if I hurt you at all.

Thanks Mike, I appreciate the response. And like I said, I wasn't looking for an apology, or for you to consider my feelings, or anything. I was just letting some of what I was feeling air, albeit privately, since (like you!) most people don't know, and for now, I'd like to keep it that way.

As for the transphobic thing, I won't get into a big long spiel about that, but I will say that I don't think you're transphobic, and I hate that you've been getting such a ridiculous reaction too. I'm pretty miffed about how the LGBT and trans community in particular have gotten regarding this talk, and how people in general just want to yell their opinions but not listen when others give theirs. It's actually a big part of why I got out of the LGBT social justice movement; I couldn't handle people I was supposed to be a part of, supposed to be representing, reacting in the way that you're seeing now. Prime example: I don't disagree with you that I'm male. When it comes to chromosomes and genetics, that's just what I am. But that's not what I identify as, and for acknowledging reality some trans people have even chewed me out. It's ridiculous.

We don't all have to agree to respect each other, and I think that's something important that people lose sight of. But before I ramble on too long, just want to say thanks for hearing me out and responding, and I hope I'll bump into you at PAX or something in the future. =)

Of course we are cool! We were never not cool!

So there you go. It's not an easy conversation to have. Or maybe it is if you're willing to actually have a conversation. My reaction when I feel backed into corner is to be an asshole. It's essentially how I defend myself. It's been that way since was in elementary school. I'm 36 now. Maybe it's finally time to try and let some of that shit go. 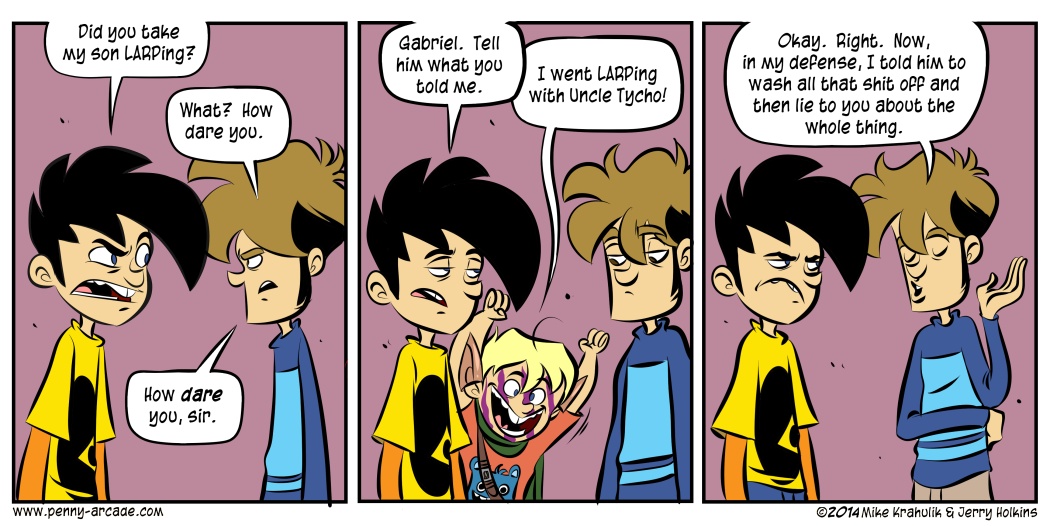