I already said that I liked The Stanley Parable; we talked about it after he had played it a bit thinking that we might get a strip out of it. Which we did, even if it wan't the one we set out to find. 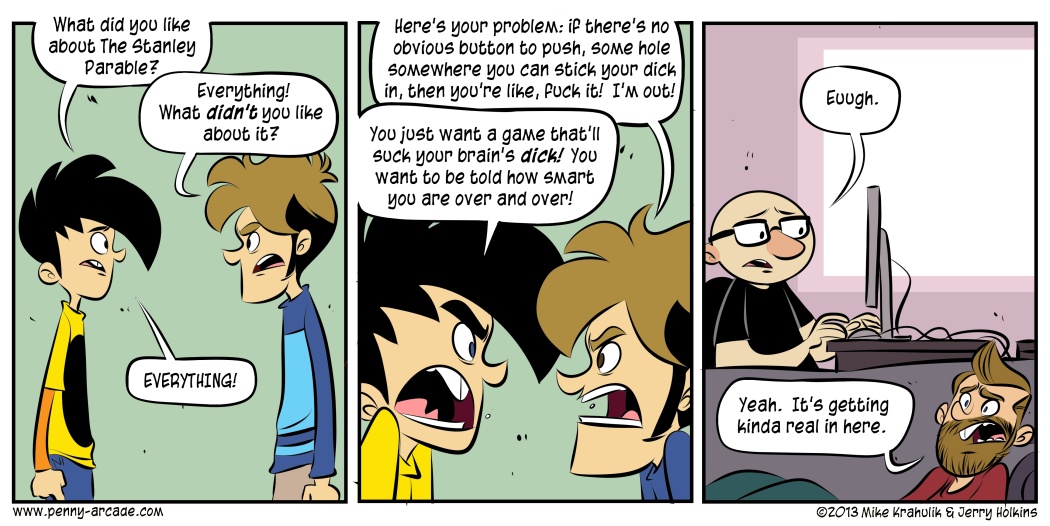 It's a complicated… piece. It's hard to even know what to call it. A big part of the reason people want the things they make to be "games" is so that they may inherit "legitimacy." I don't care about any of this stuff, I'm just communicating the state of play, which I guess is a double entendre. I'm always entending shit - that's the takeaway. And those things are in quotes because they constitute ranges as opposed to discrete meanings.

We argue so much about so many things that I can usually "find" him in any thought; I can discern the ways in which he will counter me. So it is here. And I can explain why this or that thing isn't true, switch by switch. There are many games where "all you do" is move things around, and then manage the ramifications of the moved things. The name isn't as important as the thing, anyhow. I could have the whole dialogue here, if I felt like that would be a good time investment.

The problem is at a much higher level, though, so diddling what appears to be a bunch of nodulated clusters of disagreement looks useful but isn't. They don't form the lattice of the structure, they're placed there after the fact to give the whole enterprise a patina of coherency. This isn't me saying this about him, this is me saying this about most of our awesome philosophies. They are wild west movie sets. We are attempting to make pearls from grit.

He would not put it this way, but for Gabriel, a "game" enters into a contract with the player and this contract has certain features. You know when the contract is being fulfilled even if you cannot enumerate everything the "contract" entails the moment you are asked. At root, there are many people who feel that The Stanley Parable (or Gone Home, let's say) are lying in a sense - they are leveraging the trappings of a medium without any intention of truly embodying them. Even if they're doing it on purpose. Right? It would be like if an orchestra set up, tuned itself, and then built a jungle gym out of their cellos and shit and started climbing around on there. It would be… rude, in a sense. I understand that, and can file it away as being valid for others but not for me, because that's how you live in a world with other people.

But no, it's not how I feel. The old saying is that "Writing about music is like dancing about architecture," which as a long rhetorical thorn was irresistible to me as a young person. I recognize it now for its myopia and its cowardice. That's not to say that any writer can write about music; it is entirely possible, and statistically likely, to fail. But somebody's gonna fucking dance about architecture one of these days, they will, and my greatest fear that I won't recognize it when it happens.