The Disney/Marvel brand cinematic engine is purpose built, unrelenting in its aim, and terrifying thus far in its efficacy. It drives in deep rods that culminate in ensemble films, and then reaps gains while it girds the next one with a new round of worldbuilding and starmaking. These people have Star Wars, now. "Witness the firepower," as they say. 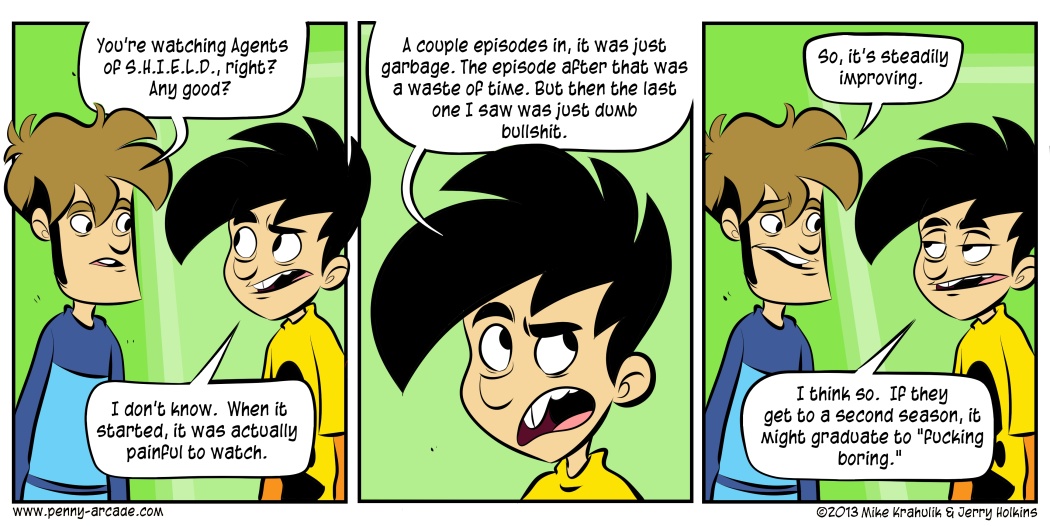 We have two data points for Thor, so I feel pretty solid in my convictions when I say that it's their "Sci-Fi Romance" initiative. The new Captain America trailer was interesting, not enough to get a read on, and it might be an ensemble piece in miniature. A diorama? I don't really know about movies. Agents of S.H.I.E.L.D., the suckered, small screen tendril of this moist beast, is exclusively for people who don't know that televisions can display other shows. It's an exclusive subset of a subset of a cult based on being unlike other people.

This is funny. Or, at least, it's funny to me. Let's see where you land on it:

I have more or less demanded the ability to purchase games digitally since we had a digital. Or, like, a Web. I do that whenever I can, to get games first and foremost, but also… there's like a million reasons. Going somewhere, anywhere, to buy "toys" when you have two molting larvae writhing all over the place, in need of supervision and calories, is a non-starter most of the time. One some level I want it to register somewhere that this is how people want to get shit. I think the environmental arguments are pretty strong, for those concerned about the state of our World-Ship. I have vowed to get absolutely every game this way, once a console goes day and date for download. Shit: I even ordered the consoles online, this time around. I'm throwing the fuckin' lever.

Except these games are, like, twenty or thirty gigs. It's not just gonna be torrent weirdos like Kiko hitting their caps, or finding out there actually are caps when they say there isn't one. These games don't play without installs anymore. November is gonna be an interesting month for the graph enthusiast. Both of the new systems apparently allow for you to begin playing games as they download, the way we may now begin watching movies before they arrive completely. Like the Phantom. Right? Let me see it.

When fantasizing about this day, it never occurred to me - not really - that buying games at the store could ever be more convenient. I think at this late hour there might actually be a case for that. This is the kind of question I want answered, the boring, daily living kind of question that doesn't have much zing in the age of the hashtag.