Talking with Kenneth, our Server Dude Cyber-Warlock Person, his fantasy for Titanfall is what you might call a "Reverse Dust" which sounds like a skateboard trick. The purpose of Dust 514 (multiplayer shooter) is to embroider the heretofore largely theoretical elsewheres of EVE Online (multiplayer treachery engine). But the realities of their Heinlein-derived "weaponized orbital factory that shoots warbots" are something long to manage logistically! I want to make sure the breakrooms are constantly topped-off snackwise. Just imagine the spreadsheets. 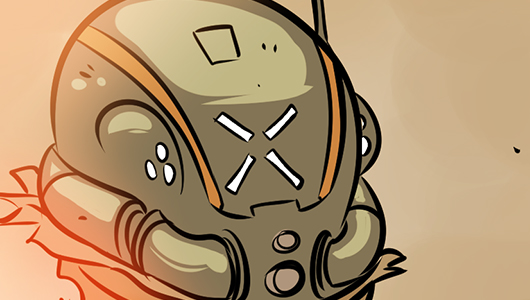 Having played the game every day it was available, and having discussed it at length with Kiko while feasting on pounds of shrimp and hand shaven noodle, I think I can sorta put a bow on it. In cursive, the bow says "it is more than you thought," and the ribbon wraps around every part of the game.

I mention this because (among other things) I used to tell people Attrition was Deathmatch, and it isn't. You can have games where you do everything right and still lose, and you fall to your virtual knees and beg your electronic Lord for his simulated comfort and wisdom. Then you look at your stats, and they are the exact same as the strutting victor, except for one vital distinction: they have been farming creeps.

These random AI entities aren't merely there for XP in this mode, they aren't perfunctory, and the accepted MOBA nomenclature isn't entirely stable. They are points, congealed, demi-sentient points that walk around. This matters for a couple reasons. First of all, it's fun. Second of all, it's a clear demarcation conceptually and systemically between Pilots and Everyone Else; this is why they let you have a robot. Third, okay, let's say you aren't exactly Charon the fuckin' Boatman of the River Styx. Perhaps, like me, maybe you aren't Mayor Fang of Bloodtown. You can contribute mightily to your team's score by picking on those who are not your own size and are, indeed, substantially smaller by every conceivable metric. I haven't seen something like this since the bizarre, drastically underrated mutant of Conviction's 1v1 modes. But there are many games occurring simultaneously in Titanfall, and you can succeed at one or more of them.

There is a period after the match conditions have been met called Epilogue, where the game switches from Unlimited Respawns to A Single Life, and the losing team is hounded back to their dropship. This… warps perceptions. Because if I win, but they still get away, it tempers my victory. And if I lose, but I'm able to get my friends or myself back to ship, I feel like I won. The psychology of Epilogue deserves to be explored. But it's another thing that emphasizes the asymmetrical nature of the conflicts in the game. You need to change your thinking constantly. I think that may be the prime contribution: there isn't a single, undifferentiated texture to a match, which Burn Cards - single-use, single-life buffs - emphasize even further. We have next-generation consoles, and now we have next-generation thinking to accompany them, and I think that if I were making a shooter right now I would be absolutely terrified.