My mind is essentially redlined all the time. But I can always instantiate "the receptionist," a demi-conscious shard of my capacity that appears to be a person and can respond believably to ninety percent of queries. Apportioning greater focus requires that something hit the "clutch": it must stop normal operation on account of its persistence or its unique virtue. Such things can be buzzed in and merged into the schedule. 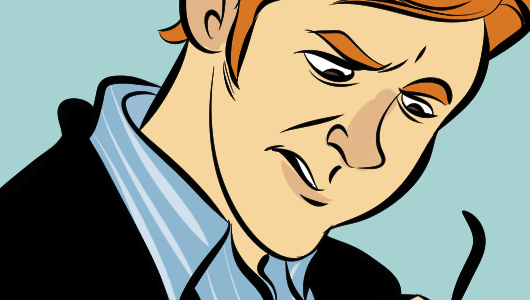 Making time for something new exacts tremendous mental costs, but new things offer psychic sugar. I do try to reserve a bit of pro bono mental space, though some clutches seem to work unerringly, and having abraded your corneas for the last fifteen years you can probably figure them out. Artificial Intelligence. Lineage. And strangeness, which I believe I can usefully distinguish from weirdness. And True Detective is most certainly strange. I doubt very strongly that the show is "going" in the way we describe, it's too easy. I have seen five episodes, out of eight total, and I don't even know what type of show it is, other than to say that the people making it don't seem to like the restraints of "type" and might in fact hate "type."

I have said all this for two reasons. One, it explains why I only got into True Detective only on the verge of its completion, and two, to make you feel better about the operation of your own mind. Have you ever, in your life, said bullshit as crazy as that which I have just described? I specifically tried not to sound crazy, and look what happened. This is how I am on Monday morning.

I spent the weekend testing different headsets on the Xbox One over the weekend, trying to find the sweet spot. I dont have one of the new Polk sets, I think they call it a 4 Shot, but I'd have to read a review or two before I trusted that pop-out mic they've got - cool as it may be on paper. This is something I'm kind of picky about, "picky about" being a euphemism for "something I have an almost preternatural sensitivity to."

Our own Gabiriel has the Playstation Gold Wireless headset, and I think I'm gonna ask him to bring it in. He streams a lot more than I do, which is to say that he streams at all, so for him I think it's a good investment - also, I think the design is impeccable, which matters to him. I would duct tape two squirrels to my head if they had good bass response. He made special note of the app, which can transfer specific audio profiles tailored to games. I think we might have found another clutch, here. I think assessing things like this is something I want to do.