The kids on the server made their statues out of wool, presumably for the wide range of colors. Their intense flammability was, we can guess, not conscious portion of the decision matrix. 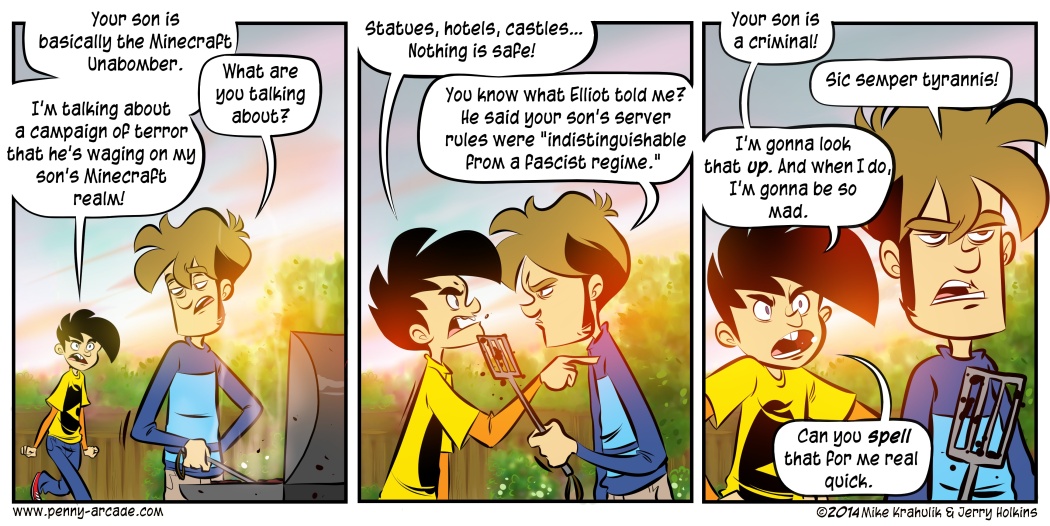 Initial reports suggested that it might be Herobrine, who you might know of, or might not. If you played Minecraft when many enthusiast gamers did, which is to say a thousand fucking years ago, and then went to Terraria or Starbound in search of untapped novelty your diagram would never have overlapped Him. But... he's not real, which simultaneously makes him the least likely and most likely suspect.

Interrogating your child is a novel experience, and we have many models in popular culture to inform us. I was surprised at how exquisite the parallels were. I could practically see the pattern of light from a lone and swinging phantom bulb. He started out hard. He didn't do it, and I should be ashamed for saying he had. But this wasn't my first rodeo, and that's an old trick. I pushed the folder across the table. "We have evidence that puts you at the scene," I said. I let that sink in. "And there's TNT in your inventory."

"That was for something else."

"You were the only one on the server when the crime occurred."

"There's no way you could know that."

That got him. He's the admin for his server, and he's familiar with the tool. But he hadn't seen the last update, where shit got granular. And that's more or less when I sent the mail to my partner.

It used to be that you had to make a Nether Portal in a Very Specific Way, though you could technically lose the corners and it would still become a conduit to the hell dimension. In 1.7.2, more dynamic portal shapes were made available. You have to set them on fire to activate them. And the story I received was that in an effort to see how weird the shapes could get and still work, a fire started that found its way to their effigies. Gabriel says TNT.

You can determine under many conditions what you tell a person, but you cannot determine what they hear. That's not a matter limited to the age of the participants. I had just read him Ozymandias, the Shelley one. I want to believe there was poetry here re: universal forces. Let's say "entropy." But it doesn't especially matter.

When people talk about videogames as a form, and further when they talk about the educational payload of such games, there are only a couple conversations you get to have, and that has to do with the kinds of people having the conversations. They tend not to have kids, and the lives most people lead appear to be wholly abstract to them, so their Startling Insights are as relevant to me as Martian Weather. I am on record as saying that all games are "educational," it's simply a matter of what they teach.

Minecraft is a game, and this game has rules. You can give those rules more or less weight. But it is also a one to one model of people and actions. Which means that, among other things, they can learn about being human.