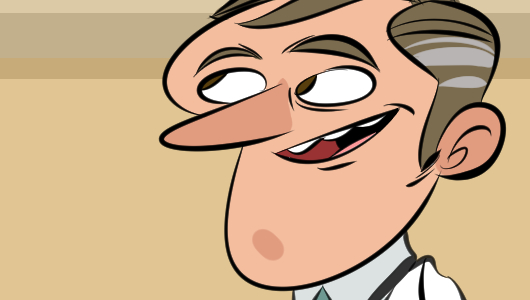 There are two places you can have your junk turned into Venetian blinds that have very similar names, and I always went to the wrong URL whenever I was trying to "bone up" on what I needed to know. One of these two offers Valium to those in its care, and one does not. So I was nervous, but under the misconception that a fear obliterating chemical was en route, which kept things at a low boil.

There was a portion at the beginning where a woman came in to ask me all of the questions I had answered on the questionnaire, but a second time, just to make sure. I tried to be as personable as possible, a great expenditure of energy, but it was okay because I only had to remain human long enough for someone to put drugs in my mouth. Then, whatever addled shamanic "wisdom" issued forth at that point had to be endured by all parties. But this wasn't the place that had the Valium.

While I was processing that the doctor came in and asked me all the questions from the questionnaire a third time, so that I was good and ready. I know what's happening, yes. I made the appointment. This is a vasectomy clinic. I understand that this is not a hot dog stand and that no hot dogs will be forthcoming.

This doctor prides himself on not using scalpels or needles, which to me is, like the bare minimum. I didn't even know that shit was on the table. I can imagine his competitors trudging away from their empty practices in the snow, their Garden Weasels clawing a trench behind them. How did they do this shit before? Did they just put some peanut butter on your balls, and let a wolf eat them?

Now, he uses a Hypo, like they do in Star Trek, but they use it on a place I never saw them use it on the show. Except it didn't take? I have this problem where they have to give me more of whatever they give to another person to make pain go away, and I said so. So I thought it was cool, but all of the sudden it wasn't cool; I would say that it is the least cool thing that has ever happened. And know what it feels like to have a pair of wire cutters digging in the nail-bed of my big toe, which was the last time I thought it was enough medicine. I started talking about PAX in a staccato, shocky way. I said that PAX South might be the first show that stays in its original location. For real. I said that.

There was a fish mobile in the corner of the room, and the top part - the part the fish hang from - was two triangles overlapping, the Star of David. I stared at it so long, and so hard, that I became a Jew.

When he was almost done, he was all like, "Last Chance!" and "Hey, Do You Want to See Your Vas Deferens" and I was like are you fucking kidding me with this shit. Maybe there's somebody that is down with that, in the way that one may be down with the clown. Maybe they're like, God Damn, fish that thing out and let's take a good hard look. But because of the fuckup with the medicine, I felt like I knew everything there was to know at an unparalleled resolution. There's nothing about it that I don't know, actually. I could enhance literally any quadrant.

So I learned too much, and now you know too much. I couldn't do it by myself; I can't be the only one who knows.