I got these three frames in a text message a few nights ago, and I can't prove it but I think he may have drawn them on a pile of spare printer paper, in his lap, while also playing Destiny. I mention it, because I can barely do one thing at a time. 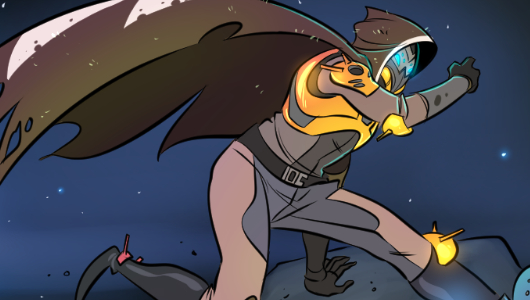 Hey! So, I got kind of a weird opportunity a week or so, and I jumped on it. I was asked to write flavor text for a game called "Apocrypha" on Kickstarter. Sort of surprised nobody took that name already, but there you have it. I agreed to do it, of course, because it's being built by Mike Selinker. His name there links to his BGG Designer page that has a lot of games on it, and it's very broad, from his Pathfinder Adventure Card Game to Betrayal at the House on the Hill to Lords of Vegas to all his other insane shit. You've played one of his games, most likely. You may even have enjoyed it.

Apparently I was a stretch goal? It is weird to be a "stretch goal." I was surprised that he asked me, to be honest; I thought I'd foreclosed any possibility. We were walking through the hall once when he was gonna give feedback on Gabe's Thornwatch stuff, and at one point he stopped, turned, and said, "You're one of those people who doesn't believe anything is real, aren't you." Which was so weird, because I'm always trying to account for this belief in my conversations with people. I'm always saying, "Dude, you seem really tangible today," or "Keep on existing, like you obviously do!" accompanied by a double thumbs up and a smile that says "There's a reality independent of our observations!"

He did ask me, though, part of the reason I accepted is that the text I'm writing for the cards goes where the art would go in any other game. Each of the cards I (and the others!) write are essentially very, very short stories, stories you equip that then deliver a game effect. How could I not.