All of Tycho's dialogue in this strip is either a direct quote from Will Wright or is paraphrased in some way from interviews. I'm sorry: I can't actually write anything funnier than the way people present their revolutionary social media shit. I can detail the loop that resulted in my closing the app, maybe forever. I read an article about the app on a website. Then, I installed the app, and swiped through a number of people's psychologically measurable, Exhibit A type narcissism. Then, I found a thread by the person who had written the article, and it was just a set of links to articles on the website I had found the original article on. Nope! That's on some Ouroboros type shit. Closing up shop. 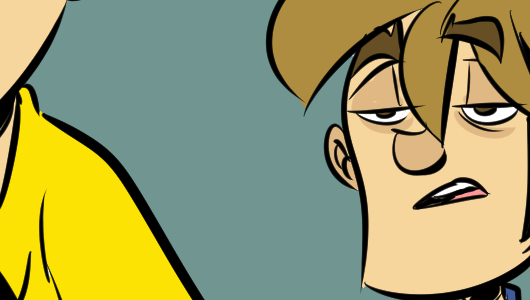 I get that there may be a coven of true sticker enthusiasts who might leverage this potent app's unique quinoa to foment revolution or whatever. That's fine with me. There are a lot of global phenomenons that don't intersect with me, or I don't use, or I find grotesque, and yet somehow I have retained coherent as an entity on this plane of existence! Which is a mixed blessing, honestly.

I feel like Steam is sort of ineluctable for gaming on PC. That's not a minority position I don't think, but it definitely matters if you're trying to launch a competitor to it. You must accept that any relationship you have with a customer on that platform will be fundamentally polyamorous. I like GOG for a couple reasons. One, that's where I buy my Witcher games. And two, they had "booth babes" at PAX one year, but the booth babes were grandmas, and they gave you fresh cookies.

"DRM Free" isn't a huge deal for me, but given recent happenings I completely understand the value, and want to support its assertion in the broad sense. So I was happy to install Gog's (at this juncture very loose) new Galaxy client which is the anchor for a different kind of game service.

Steam is more like a jukebox, everything is internal to it, and nothing is getting out. This is a much bigger deal to some people than it is to me - I've only occasionally had problems using my games in Offline mode, and feel that the convenience of the service has thus far outweighed the limitations, but I feel like it's important to establish that it's a co-equal perspective and that it exists.

The GOG Galaxy experience is intended to be a little more like a vending machine for games. I think it wants to be a "launcher plus," existing as much or as little as you want it to, which is an interesting philosophy for a "service." In their aims, you see they have drawn the silhouette of a user we don't hear from very often. I don't feel like I'll be able to really know what they intend to do until Witcher 3 comes out - a real test of their product and infrastructure, in the same way Half-Life 2 inaugurated Steam. It seems like a crazy thing for them to do, I guess, but maybe I'm partial to crazy.