I think I already talked about it, but then, I've been talking to you here for the better part of twenty years; I've already mentioned a lot of things. Having been to Australia a couple times, the time difference seems bad but in practice it's so fucking bad that it only ends up being a couple hours. Scotland is not like that. It just puts you in exactly the wrong part of Pacific Standard Time and now you're fucked. 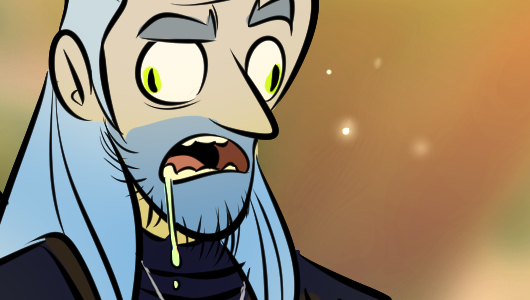 I travel enough to know all the "tips" for dealing with these things. Cajole a dog into sleeping for you is the tried and true classic I've leveraged previously to tremendous effect. None of the regular shit is working this time, which makes me wake up at one o'clock in the fucking morning ready to mow the lawn or some other daytime thing. As a practical matter what it's done is condense another six hours of Witcher Time per day right out of thin air.

Adjacent to the matter of shopping for clothes before the invention of the changing room is the fact that I just don't ever want to do anything else when I sit in front of the computer. I could initiate The Final Witching at any time, there's a big switch I could flip (presumably with the use of the Aard sign) but I can't bring myself to do it. I'm not a completionist in any way; many forces conspire to make this so. My time isn't entirely my own; that's an important distinction that must be made right at the outset. One of the main things is that content for content's sake tends not to be of fabulous quality. When I perceive that my time is being wasted, I run a quick ROI calculation and compare the value to how much goodwill the game has earned thus far. It then begins to deplete rapidly, like a Super Bar, sparkling as it does so. Hopefully it lasts until the end of the game, but even if it doesn't, it's always been hard to argue with the dollar-per-hour value of the medium.

It often has a box-ticking, house cleaning quality that is unlike valor in the classic sense. The thing going on here is that a lot of my favorite things in the game are tucked into the margins, little bits falling out of the pages of a book.

I think Djikstra is a real person. When I said something in this vein before, I was using it as a construct, a way of approaching it. Now I mean it literally: I can't leave him in the lurch. I've known Roche forever, and if I can help him even accounts, I will. The only thing providing any other source of gravity is that they just added Co-Op to Card Hunter, so. If anything was going to get me out of this iron loop of reaving and revelation it would of course, of course, be another, different kind of card.