Because art is the main way you manipulate Gabriel into doing what you want game-wise, he's always been a big fan of Tearaway. Also, he owns a Vita, and those with Vitae are forever on the prowl for an excuse to use them. Except that a Vita is no longer required to play it now, because there is a remake of it for the PS4 called Tearaway Unfolded that has its phasers set to "charm." Gabriel was telling me about how it works with such glee that I suggested we should skim and then refine that glee for your use. 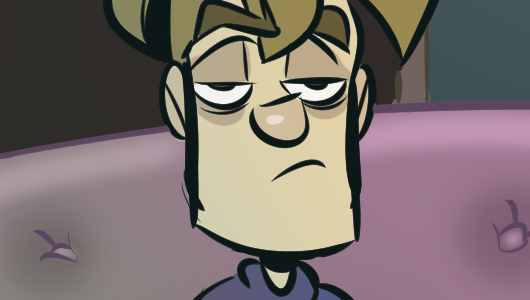 I feel like we're at the top of the roller coaster, gaming wise, and we're about to crest it and start collecting speed very quickly. The 6th is sort of where it starts next; for me that means Disgaea and Rock Band, both legendary time consumption engines, along with a Transformers game from Platinum that I'm excited about for what is essentially no reason. I can't prove a single one of the assertions my heart has made about this game, but I will clutch that little hope in my hands and keep it warm. Anyway, all stuff I want, on one day. That's why I'm glad that The Beginner's Guide came out a little before.

I'm always trying to reverse engineer the creator of a game via what I perceive in their work - even though I know that's not necessarily a viable methodology. Something that routinely confuses non-creators is that a work might contain nothing that could be used to reconstruct a person's character. Work can certainly be created or edited through your own lens, sure. But often, my perception of it is that it's coming from somewhere else: dialogue that happens in my own head consists of things I deeply agree with and am, in fact, quite opposed to. You wouldn't be able to use it to find me at all, except in the negative space around it. Painters generally use paint - an external medium - to make their work. It can be like this with ideas, also.

There are autobiographical works, obviously - I'm not talking about those. Except… I don't even think an autobiographical work necessarily says anything about a creator, anything useful anyway. People are notoriously poor judges of their own character and tireless salesmen of their own virtues. They are perpetually authoring fanfiction about their own lives, and I'm happy to take it as a data point, while fully expecting them to have sex with Vegeta at virtually any narrative juncture.

I wondered at one point, in this very space, what would happen when the "found works" we started finding were discovered on hard drives instead of past-due storage lockers, attics, and sheds - and that's close to what we have here. Check out the trailer if, like me, you are an unrepentant fancypants and are looking for ways to further embroider your leggings.