My policy is always to push things a very small amount past where it is reasonable or even, like… good. Have you ever eaten a burrito, like a Taco Truck type burrito wrapped in foil, and at the very end sometimes you take a bite with real enthusiasm and occasionally eat some of the foil. But there is a portion of the burrito which is inextricable from the foil by that point, it has suffused it such that only the truly bold may enter this rare and refined Mouth Palace. 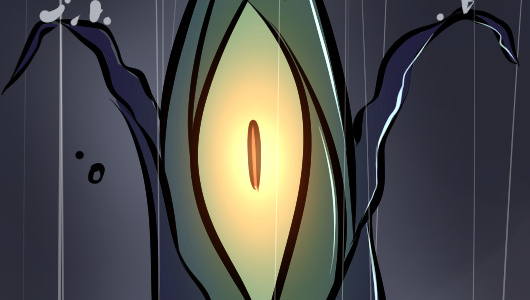 Monday's strip was about Mike's new campaign, which is coming along really well and I'd be surprised if it didn't become one of our capital T Things at one point, in the way that Thornwatch or Acquisitions Incorporated is. Or, you know, Penny Arcade I guess. I guess that's also one of the things we do. Once the campaign gets underway I wonder if he'll go into it in the post like he used to do. I guess I could make him; he does sit very close.

But it was difficult for me not to bite further, perhaps further than the available food, with a second strip detailing the unprofitable narrative depths to which I'm willing to plumb. I would be very surprised if I was able to get a third strip out of Gabriel on this topic. To maintain the metaphor, that would constitute balling up the empty wrapper and just eating that. But I am a depraved creature and there are none who truly know the depths of my wickedness.

I had a chance to check out Kards a bit today - I think about it all the time, but it's possible you've never heard of it. A CCG from a new company called 1939 Games made up of CCP vets, it just entered Beta, oh, about two hours ago.

I never played in the Alpha, so going from screens and short videos I saw I thought it might be a situation where somehow - and deservedly so - Gwent had become a genre. Kards definitely has Ranks, forward and back, but each player doesn't have their own Front Lline - there is a single Front Line which players fight over. It also has Hit Points in a more traditional CCG nod, though those points are contained within a card that lives on the board itself and can be directly attacked. Lastly, it uses Kredits in lieu of Mana, with a pool that grows every turn, but attacking with many cards costs Kredits as well in a recognition of the Supply Lines which enable conflicts at scale. I don't think I want to tell you anything else about Artillery or Aircraft right now, I'd rather you see how these things work in practice. I'm earning the base decks now playing against the AI, and its identity as an offering in the space - defined by some very striking art - is making a very strong impression.