When I was pulling up our Gran Turismo 7 video to link it, I ended up skipping through a few parts of it to appreciate just how otherworldly some aspects of it are. I mean, look. I haven't played the last few games, so I don't know if this perverted oligarch is like the final car boss of the franchise now or what. 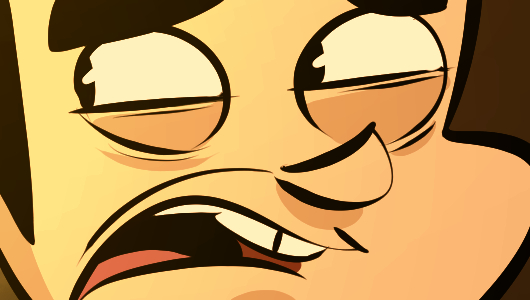 I think the best graphics I've ever seen on a console are inside this dude's cafe. You can see your car outside, beyond the focal length of the camera, and the interior is essentially a real place. These forks and plates are being bombarded with simulated light. The camera moves tastefully. When you open the menu, there is no food - inside, there are pictures of cars.

The meals in the menu are your quests, and when you have eaten/driven the meals/cars, then… I mean, you'll get it in context. Shockingly, perhaps, we are so trained by progression mechanics that we can open up a cafe menu and order food cars and be, like, "Yup." What we discovered is that the "reward" for completing a menu is that this Luca dude is gonna hold fuckin' forth. Gabe doesn't think they're skippable, but I think he was just paralyzed by the whole thing: the game is such an act of worship that it seemed like skipping these things would be rude to Luca, which - I can't stress enough - is not a real person. I'm situated so far outside the context that it's like intercepting some form of alien pornography.

I was even more annoying as a child, if you can possibly comprehend it: my parents would take me to get-togethers, and I would think that I could talk to the adults, but adults are less interested. Eventually I got in trouble for not observing some kind of social rule, I didn't have them modeled and simulated as well as I do now, and my mom gave me a timeout or whatever in some chamber our hosts had off the living room. The cabinet under the television in there was stuffed to the gills with porn, heaps of it, novel scenarios, and I was too young to understand what was happening exactly but I understood that it was not for me. I felt like my mom needed to know about this stuff right away, so I brought it out to the same group I'd just been exiled from. I held it open to the group, nodding sagely.

Anyway, that's how I feel when I watch Gran Turismo 7 being played. Zero hate. But it is definitely for somebody else.