Hi! I deeply misinterpreted my calendar, and a panel that I thought was at one time was at another, much earlier time, which meant I needed to do two panels back to back the moment I got out of bed! It was very exciting. Typically I'm able to scrub away the filth and effluvia the body creates o'ernight, but this time I emerged on stage cocooned in a rustling, amber crust - a crust insects prize.

It is a delicacy to their kind. 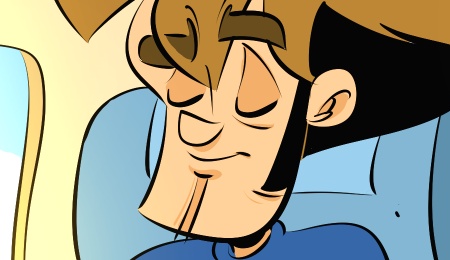 Is PAX Unplugged the greatest show of all time? It's the only theory that fits all the available facts. After helping Cephalofair announce the Gloomhaven RPG system<\a>:

A huge announcement is coming at PAXU, and I could not be more excited to be sharing the stage with this stunning list of talented people!

Come for the news and then stay for the inevitably awesome live play, Friday at 1pm on the main stage! https://t.co/LucQFUNhwN

I had a chance to teach a few people how to play Kill Team. I then attended an incredibly secret panel, caught up with people I only knew as a text string in real life, and then it got wilder somehow. It may even have gotten Gene<\i> Wilder.

I met the creators of the Human Rights Boardgame<\a>. There's a deeply normie convention occurring simultaneously, alongside PAX, some kind of educator thingy, and I think maybe these two attended the wrong convention.

I hope I was able to help them understand some interesting ways to connect classrooms with the tool, and also to enourage them generally, because they're reaching the twenty portion of the eighty-twenty rule and it's a place I'm familiar with. One member of the team is from Melbourne, and he didn't know about PAX Aus really, even though the city dedicates the entire week around PAX to a professional gaming development festival. I usually only get to talk to Aussies once a year, so it was a delight to have this opportunity to display my collection of Australian linguistic norms a second time in one year.

Long story short, I didn't even have an opportunity to walk the floor yet, and that's usually my favorite part of the show. Here is my report, overall: it's feeling pretty PAXy at this show so far.