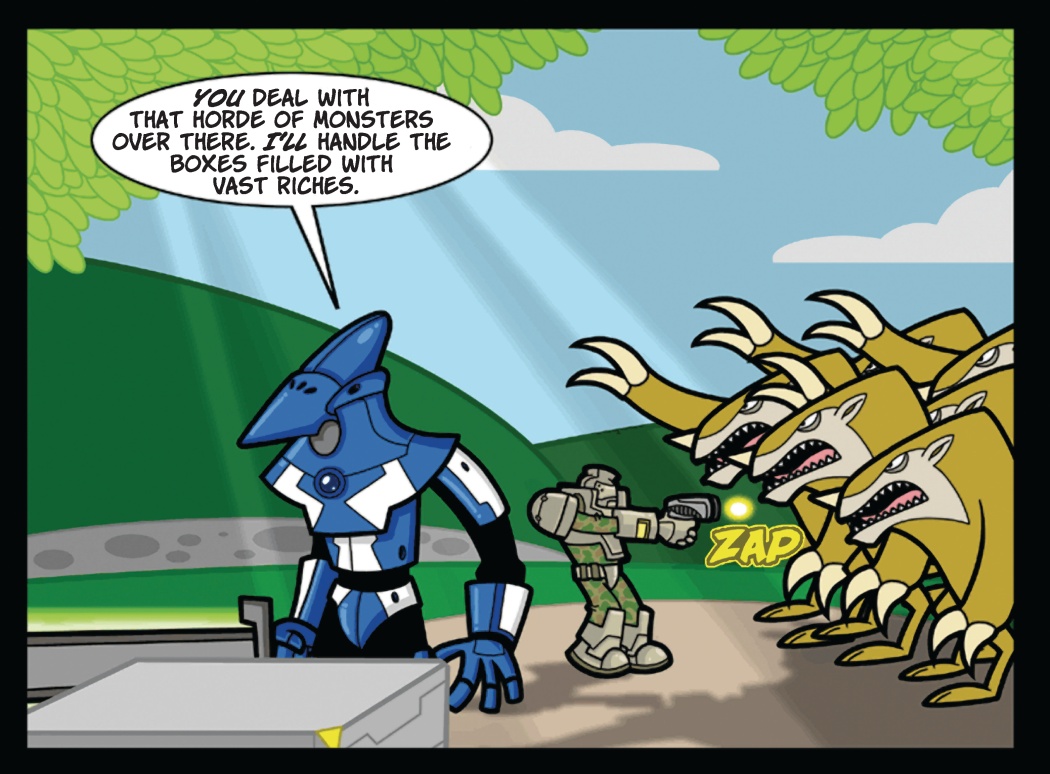 The Penny Arcade PSO Weekend was a smashing success, insofar as an exotic menagerie of hostile organisms were successfully smashed. I don't know how many people actually showed up, but it seemed like a lot, or at least, a lot of people who dug out their DC's and went through the trouble of setting them up. There was much discussion of the upcoming beach zone in PSO for the 'Cube, a game whose release will likely kick off another weekend like this one. About a half-hour into it, it occurred to me: Why aren't we doing this all the time? PA, I mean? Why aren't we having extravaganzas of one sort or another with marked frequency? The next one will probably be a PC game, Medal or Wolf probably, and I'm willing to bet that HomeLAN might even handle the server side. Still thinking, still thinking, but it's like I said in the forum thread on this topic - it's like having a social event without all the weak knees and discomfort our kind often associates with all that realspace crap. I may not be making a lot of sense. I played PSO for around twenty-three hours of a forty-eight hour period, I can't really focus on shit, and when I look up and down this text I couldn't tell you if it was a phone book, or a cookie recipe, or what.

A strip was, we thought, in order to commemorate the event - which is really just an excuse to do more PSO comics. I've got two more ideas actually, right here in monday.txt, and I was planning on drawing them myself until I remembered that my drawrings are so bad that they might actually make you die. It's fine. We can use this time to talk about Gabriel's deplorable behavior around Item Boxes, a trait he no doubt picked up from that nasty, hairy Monkey - a remorseless creature whose roguish, crate-related antics were so pronounced that he earned the name "Bruce Boxleitner."

We went to see Resident Evil, as implied by Friday's strip. Sign of the Apocalypse, Sign of the I'm Getting Stupider-alypse, who knows: but there are much worse ways to spend your time and money than the RE movie. Believe me, no-one is more surprised than I am.

I saw no reason to link it on the first day it was available, exacerbating what was sure to be a hard day on their equipment - but Portable Monopoly (right, the GBA lighting solution guys, we did a comic strip about it) are finally set up to take orders. Just as good, if you'd like to see just what their thingy can do for the system, take a gander at one of these videos. Holy shit. Chris over at Outer-Edge knows the guy who designed it (I guess), and he's got some first impressions posted at the site. The final name for the lighting product is the Afterburner, who knows why - but if you see that mentioned over there, they're talking about the light. My naming suggestion? Lucifer.

My MC Frontalot CD arrived yesterday, and it happens to include his brand newest jam, entitled "Which MC Is That?" - it's available at his site. Humans seem to enjoy it when I keep them abreast of the Nerdcore Hip-hop front, and it pleases me to operate as an emcee for MC's. "Official MC of Penny Arcade" is not a title we bestow lightly - or ever, because I just now made it up. Since it's there, he might as well take it.

Also, advertisers Game Partisan and VGNation are at least partially responsible for getting that terrible man off the site, so please show them some love, won't you?

wait, was he thin?