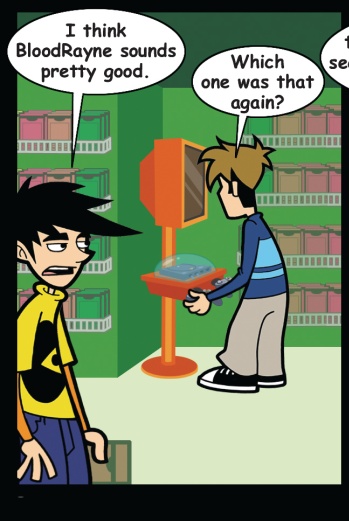 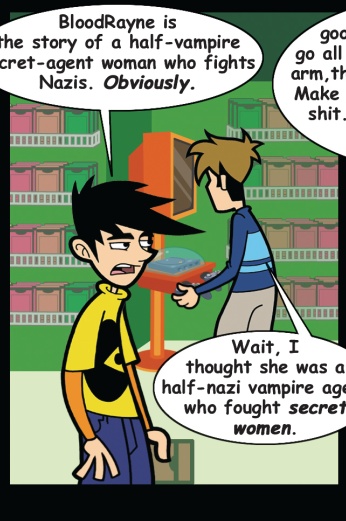 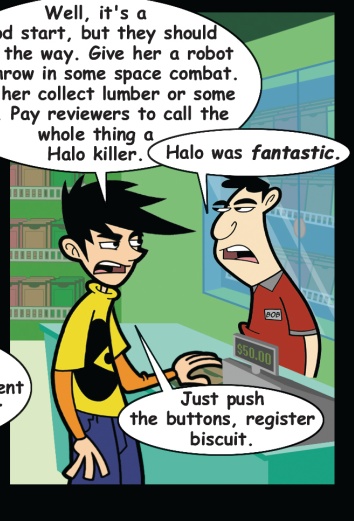 I actually like Terminal Reality as a developer, so don't take today's strip to mean the opposite. When I told Gabe that this "BloodRayne" was from the (quote) Nocturne Guys, he made a scrunchy face which said "I am eating an entire lemon." He was coming from an angry place. Long ago, see, Gabe entered an art contest at a site - Kazi Wren's "Spookhouse," if memory serves - and won a copy of Nocturne for his trouble. In reality, it was me that won it, because after playing it for around ten minutes he uninstalled it and tried to lose the box underneath a pile of stuff. Developers, you will find that our Gabriel is not a patient man. He takes your poor control scheme and fun-house camera angles as calculated acts of personal aggression. Me, I'll let you get by on raw style just so long as this style of yours > some massive pain in my ass. Not so with my man Gabe. Even when he gets your game for free, it would appear that you still owe him.

Anyhow, I have feeling that BloodRayne will play around with its admittedly ramshackle premise and have a good time. When your new game makes such a brazen run on our nation's Strategic Cliche Reserve, though, we can't be expected to just leave it be.

The Gaming Intelligence Agency's Zak McClendon leaves me precious little to discuss, after the robust product he delivered on Tecmo's recent Fatal Frame. Like absolutely everything else hosted on The GIA's server, I demand that you read his review without delay, particularly if you find yourself enjoying the Survival Horror. I'm within an inch of beating it, so I feel comfortable sounding a note of agreement with Zak's overall assessment. It's real good. The only part I'd like to perhaps draw some more attention to is the sound design, which makes me a little sick even remembering it. I had no idea how potent the aural component of a game experience could be before Irrational's System Shock 2, and I have played every game since then via headphones to emphasize that fact. Not all games succeed on this level of course, but Fatal Frame is one that does. I've got a decent pair of Sony headphones I play all my console games through anymore, big, comfy, cover-your-whole-ear jobbies that leave no question as to the sound designer's true intention. You know by now the conceit of Fatal Frame - you must capture tormented ghosts on film, via what amounts to a fun, fast-paced minigame - so it's clear that it taps into some of the modern folklore that surrounds spirits that wander. Another notion, though perhaps not as widespread, is that audio tapes can capture evidence of paranormal events as well. The back of my neck is tingling as I remember it, but they use this "audio tape" hook several times over the course of the game, in boss battles as well as the evidence one necessarily accrues in a survival horror game. I don't want to write about it anymore, it's kind of creeping me out. I mean, I know that stuff like this is more than likely complete bullshit. But if you've got it in you to invest some suspension of disbelief in the game, take my advice:

This is a very exciting day indeed: Gunvalkyrie, the unforgiving Xbox shoot-'em-up that set my heart ablaze at last year's E3, is supposed to hit stores Wednesday. Of paramount importance to Gabe (as well as many others, including Tiger Beat dreamboat Greg Kasavin) is the release of Virtua Fighter Four. VF isn't really our series, we're really Namco men for the most part - but if even a tablespoon of what people say about this new one is true, it's not something any enthusiast of the genre can be without.

and a compass wouldn't help at all