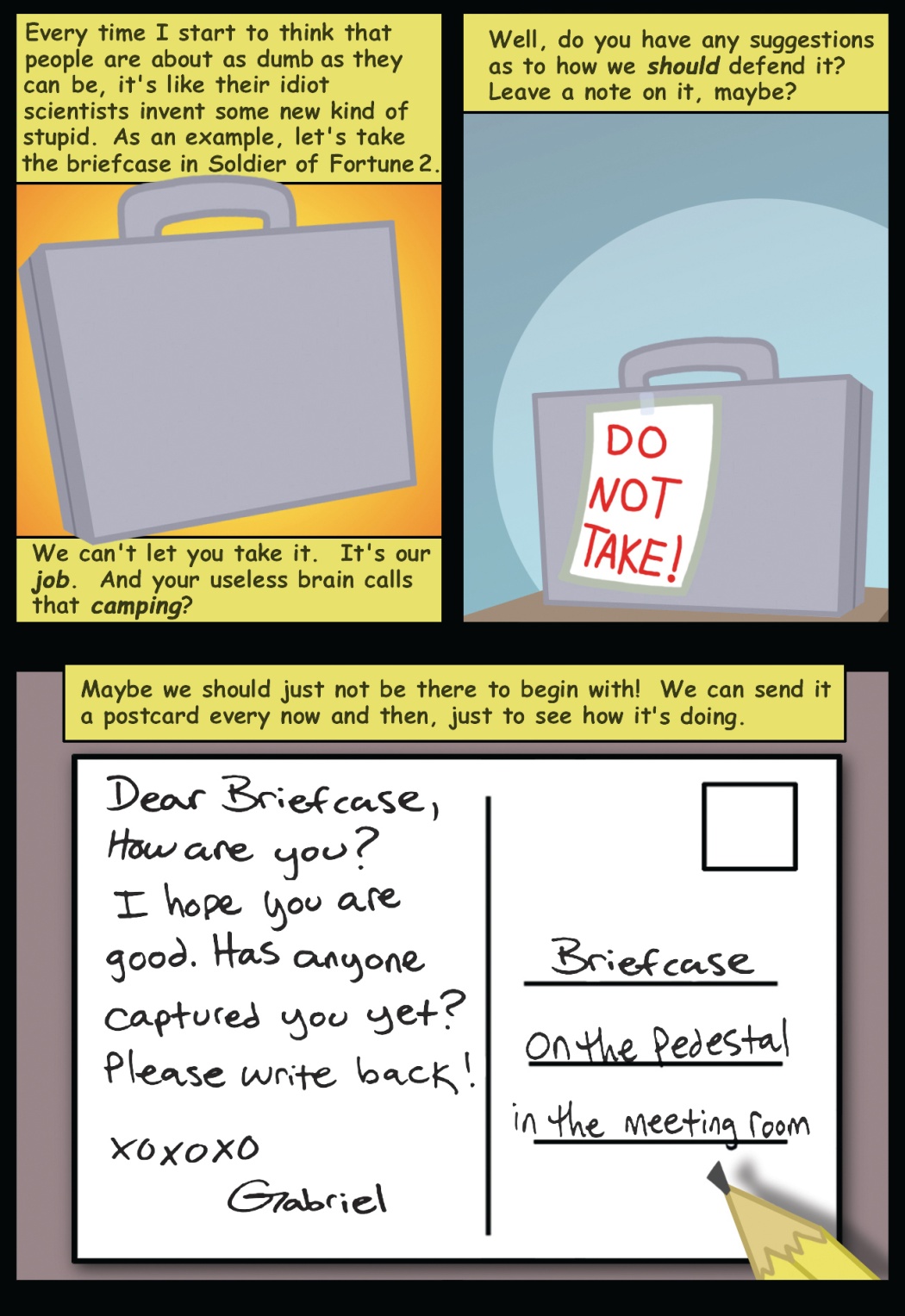 Today's comic has plenty of words already, and as such does not require much of an investment on my part. Suffice it to say that it concerns idiots, briefcases, and Soldier of Fortune 2. When the illustrious Justice Cat called us pussies for using the crosshairs, I knew then that our race was doomed. No-one could possibly be smart enough to counteract that much stupid. So, Universe, it's been great being bipedal and everything, though I feel like I got fucked out of a grasping tail. All in all, I give existence an Eight.

Despite very clear instructions on how to post news properly on non-strip days, Gabe had to rub his monkey hands all over my beautiful machine. It turned out to be okay, and maybe just BSing on weekends will be something we do around here - but I wanted to add my take on the "boosting" issue he raised.

As I think we're all fairly clear on by now, Gabe is something of a pickypants. I showed him Counter-Strike so long ago that I don't remember when it was, and when he found out that you didn't come back after you died, he essentially lost interest. That seemed ridiculous to me, as that death element - and the tension associated with it - are the whole point. I wasn't dissuaded. I got him to play Front Line Force (fuck mod - this is one of the best games ever released) without much hassle, which introduced the "waiting to respawn" concept. Not long, now - a few seconds, tops. Then, Return to Castle Wolfenstein suggested that it was not uncommon to wait as long as a half a minute. Once that process had run its course, I got him to try Medal for one night - and the journey was complete. He'll never go back. He wants death - preferably, that of his opponents - to have ramifications. But he doesn't have the CS experience to look back on - experience that would show him that bitching on a server is some kind of universal constant, or that people can and will jump up on each other in some Cirque du Soleil type bullshit if they think it will help them kill you. That's really it. They want to kill you. And the game allows them to do it, so they do it - a "strat" or strategy instead of an out-and-out exploit. Where the line is between those, exactly, has always been a sort of ideological hinterland. This is not like a weapon balance issue, which I will equate (for the purposes of this discussion) to pieces on a game board. No, we're talking about the board itself - and if you deploy a technique that allows you to, in effect, go directly from the B&O Railroad to Boardwalk whenever you want, circumventing the intervening space, what is that? Is that you being, for lack of a better term, a cockmonger? Or that an example of gameplay that emerges, unforeseen, from the delicious nipple of human ingenuity? I guess I'd have to ask what the map maker intended. In the case of the one Gabe was complaining about in SoF2, I've done that. With any luck, he'll respond.

I can't seem to get to Pandora Networks right now, haven't really been able to since they posted the fifty-meg archive of our interview. I don't know why they're down, I don't think it's us, but you could probably do without it. I'm never authorizing another voice interview again. We are not superstars. We are fucking dorks. I sign up for this shit because I think I'm being polite. If you do get it for whatever reason, maybe you clicked on it by accident, bear the following in mind.

We're still looking for companies to advertise their FABULOUS PRODUCTS on Penny Arcade for next month, so if you've been, you know, just holding off on contacting us please stop doing that. We need you to contact us right away, in fact!

doing nothing but aging