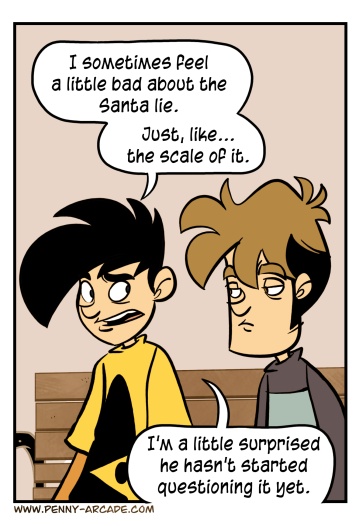 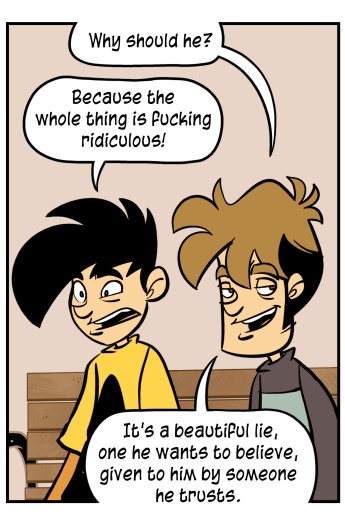 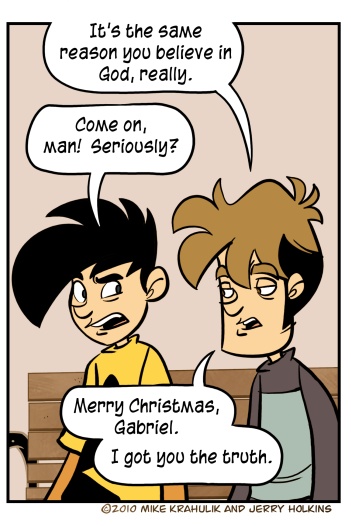 The strip is probably the only place he and I can discuss religion without getting into a fistfight.  His concern (generally speaking) is something we discuss often, though.  I can't get through a ten minute conversation with my own son without loosing a quiver-full of immaculately constructed lies.   If he had any conception how ridiculous, insulting, and arbitrary his shit was about to get, his quatrains would get even more despondent.

At my house, Angry Birds is a way of life. There is a book on my mantle, also written by my boy, which is called "The Mighty Eagle's First Christmas." I don't want to ladle up any spoilers or anything, but its twelve savage pages are soaked in the blood of pigs. Not really; I just liked that sentence. In reality, the long war with the pigs occupies a scant two pages and the political allegories are almost entirely glossed over. At one point, this vengeful bird-god discovers a dryer ball (civilian nuclear initiatives?) inside of a baseball cap (sovereignty in a world where pre-emptive war is a reality/illegal trafficking in marmosets). Ultimately, the Eagle needs the assistance of the other birds to open his presents, because his own brutal talons are too big - too big, and too sharp. They are suited only for destruction.

Developer Rovio released an update to the game with more content, which is nice, especially for a game that is (on the iPad, where we play) like two bucks. They also added something strange, the ability to skip a level you're having a hard time with it, for ninety-nine cents - or, the entire price of the game on most platforms.  What you get for your one-time purchase is an avian death squad that is fired from an orbital platform.

From a design perspective, The Mighty Eagle offers a substantial improvement over the regular game flow - particularly for children, but really for any person who longs to experience the entirety of the game they bought. In a single stroke, it acts as a steam valve for frustration as well as a way to index your improvement as a player - after you've used an Eagle, you must defeat the level normally to be able to use him again. It also constitutes a second way to play the game, because any level you have beaten can now be played (and scored) a different way, with an eye toward the complete obliteration of pig strongholds.  These are smart things, and the game should really just work this way.  I want to be mad that it costs as much as it does, but it's seriously a total of three dollars for a game we've played for months.  Given how much you and I typically pay for games, I barely know how to contextualize this.  Value starts to get a little incoherent down at that threshold, which probably explains the success of the model.

I've just gotten word that as of now, in the parenthetical continuum of Child's Play 2010, we have amassed a grand total of $1,853,894.59. Eventually the numbers get too crazy, and the thought of typing them completely out seems physically arduous. I must say that this is beyond any reasonable expectation I had, well beyond, and it makes the thought of haranguing you for more money a little strange. Note that this figure doesn't include the proceeds of many, many independent initiatives in operation, like (for example) the Humble Indie Bundle. We won't know for sure until next year, but I think that Child's Play - the most unlikely sort of charity, one operated by sardonic malefactors, one which two idiots inaugurated in a garage - is going to ship two million dollars in toys and games in a single year.

So Merry Christmas, or Happy Hanukkah, or whichever appropriate adjective/noun pair describes the contours of your localized revelry; know that, whatever its parameters, you have made this true for others as well.

to grow flowers in the desert