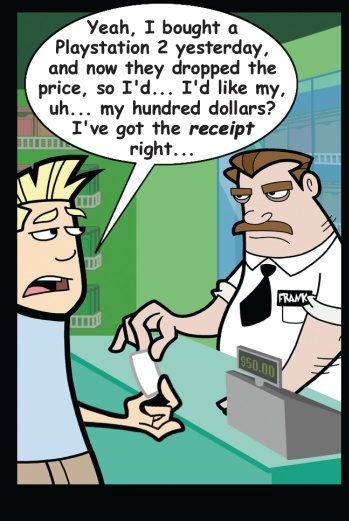 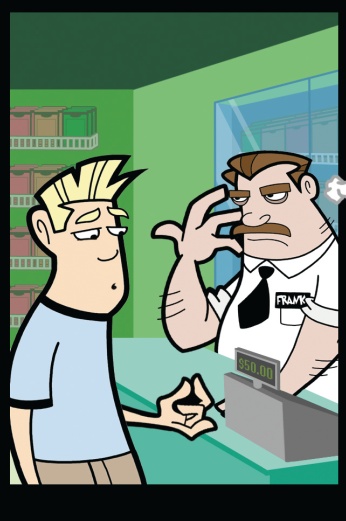 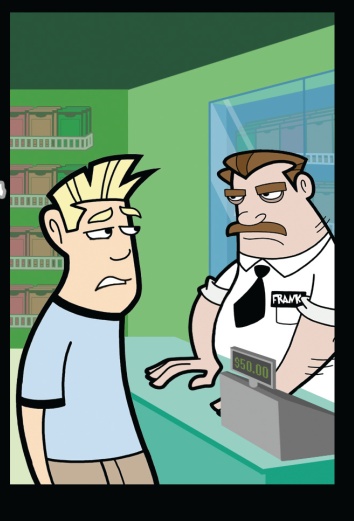 When the whole console price war was just a blasphemous rumour - and really, a rumor that's been around awhile - it didn't really warrant a strip yet. With only one player left to act, it's probably time we chime in. There's an interesting article at MSNBC about the whole thing, which you are welcome to think of as an appetizer.

I mean, God Damn. It's on. This is that Clash of the Titans shit. Yes, we all knew it was coming. But I think we understood, too, that it was to manifest later, as resounding (but otherwise solitary) shots fired amidst the annual industry skirmish of the E3. When Sony made their cut well in advance of expectations, Microsoft almost immediately followed suit. Indeed, if one were to find themselves at EBGames dot com, they might be presented with an intriguing menu. On one hand, "you get more bang for your gaming buck" with the PS2. Alternately, "the Xbox gives you more value for your dollar." I, uh... Hmm.

If I understand correctly, the Playstation 2 has been outselling the Xbox even at the old prices - so there was really no alternative to lowering the price of the Xbox. Much has already been said about the loss Microsoft is taking on each machine already, though - don't doubt that this hundred dollar drop hurts them more than it does Sony. As this conflict moves online, things are going to get interesting. The hard disk and connectivity are standard features on the MS offering - to get the most out of a PS2 online, by which I mean Final Fantasy XI, you're looking at a broadband adapter and the HD as add-ons right out the gate. What's that going to run a man? I have a feeling we're about to find out.

Obviously, the third player - Nintendo - hasn't tipped their hand yet. Contrary to the MSNBC article I mentioned, I'd heard that the price on the GameCube was also headed for Cutsville. The other two rumors came true on an accelerated timeline, will we hear something out of them today? I'd like to think so. What form could it take? It was said that we'd see GC's at around the one-fifty mark, but who knows if they'll be satisfied with a fifty dollar difference between themselves and their competitors, which cuts their prior advantage in half. You know what I'd like to see? I'd like to see 'Cubes sell at one-fifty or one-seventy-five, and include a GameBoy Advance with that little cable thingy that hooks them together. I mean, I'm just talking. I have no idea if something like that would even be feasible, but it seems like a fantastic way to differentiate themselves. I worry about the GameCube a lot. Just being fantastic isn't going to claim victory under these circumstances - i.e. against opponents who are willing to take massive losses on their system, driving by homes at high speeds, throwing their product onto your lawn from the back of a fucking truck - and third place in this conflict is really just a polite euphemism for broom sodomy. They're never going to survive unless they get a little crazy.

Let's talk about net stuff. We have heard from internal sources that, in no uncertain terms, Sony has no clue what its online strategy is. I know they've said stuff, made announcements, I'm just telling you what they told me. Microsoft, well, I've already said that their online thing looks like the best of the bunch, because they, uh, actually have some idea what they want their online thing to do. It's unrelated, but I think that Jeff Henshaw is a demon who wears his victims and masquerades as a human being. Nintendo, well... I mean, read the press release. Most of what they say is designed to differentiate themselves from Xbox Live, which is a pay service. They couch it as Developer Empowerment, which I thought might be true, in an alternate universe where words have no meaning. It looked like code for "what happens, happens" to me, which I didn't find particularly comforting - until I thought, wait, that's kinda how it works on the PC. They put out the server package to download, and magically, servers become available for me to join, and then I shoot a man. It's unprecedented in console gaming, as far as I know, but leveraging "the community" as it were to host their guerrilla multiplayer component could make a distributed approach viable.

In closing, we have the best hobby ever. The End.

all the motherfucking bets be off 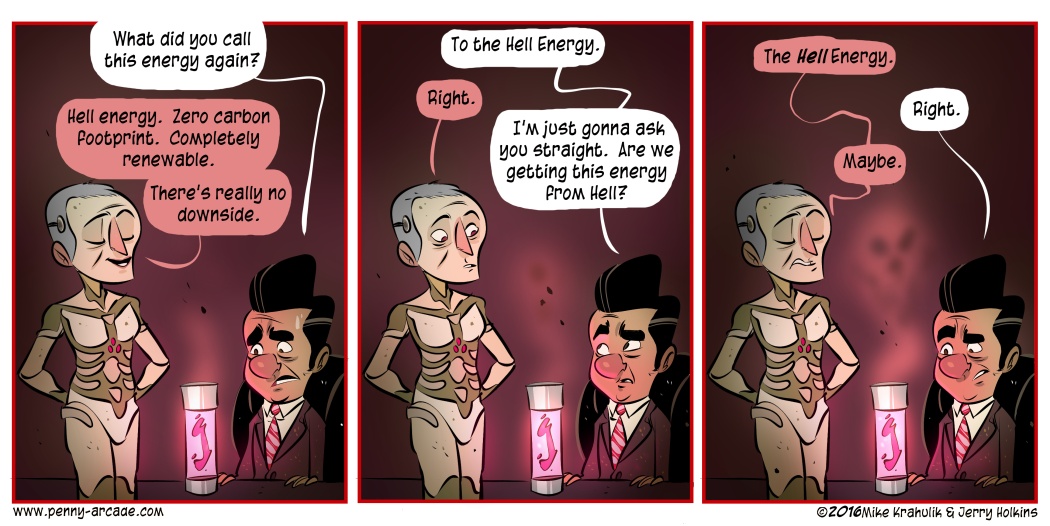