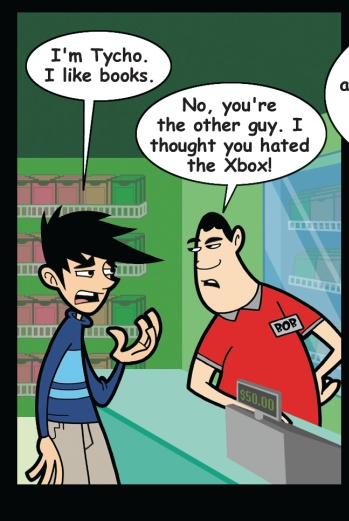 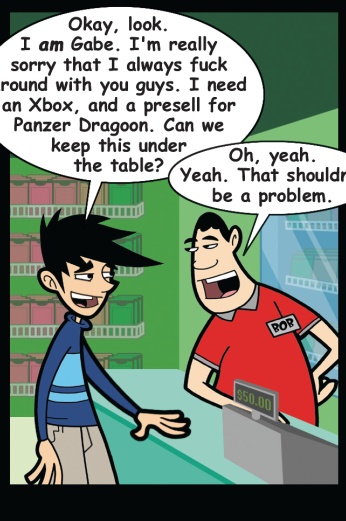 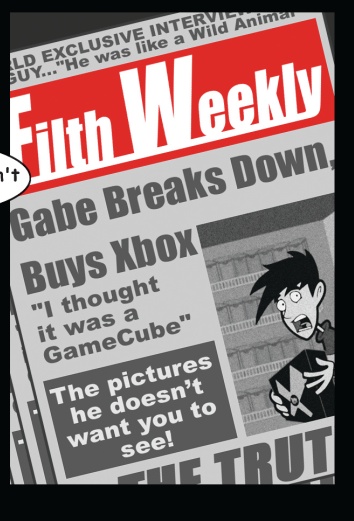 Things were difficult enough for him when there was just the KOTOR issue to deal with. It might as well be said: like the God issue, and at least as important, the Xbox is one of the few things he and I can still argue about. But Sega's apparent dedication to the Xbox was going to reel him in sooner or later, as it did me - it was just a matter of which title was going to do it. Seeing his dragon's bug-wings iridescent in the rain was probably too much for the poor child, and flying down through columns of devastating, beautiful airships probably didn't help matters any.

To conclude, Gabe and I may never see eye to eye on the Xbox, but at least he's going to be out like three hundred bucks.

I've held off talking about some Expo stuff because I didn't feel like reading the entire canon of published journalism on it to see if I was duplicating effort. As per usual, after a couple days of paralysis I stop caring.

I picked up Soldier of Fortune 2 when I got back, and you don't need to play it very long to know a couple things. First, you probably don't have enough machine to run it right with every visual setting on. Second, even though I know that it has a random mission generator, the fact that it has such a limited supply of quality, hand-built Infiltration maps (the play mode we preferred) is sort of a disappointment. This might make it seem like I'm disappointed with the game as a whole, which isn't exactly accurate. Capture The Flag with SOF2 weapons and levels is fantastic, and that isn't hyperbole - it makes up for the Infiltration deficit several times over. I'm not sure if I've ever enjoyed gunfights as I do in this game, single or multi. The things you can do to people - inadvertently, or, uh... advertently - are actually kind of scary. There's this vile imp that flits from development studio to development studio, whispering "Stealth Missions, Stealth Missions" in the ears of developers while they sleep, and I really wish he would stop doing that. Stealth missions are okay I guess, in a third person game, when I know exactly how I am situated in the environment, but I don't find them even the slightest bit intriguing in my first person action games. I find them really fucking irritating.

This is crucial: A couple months ago, or a year, or a week, I'm not good with your "time," I talked about the sorts of things that were possible with the GC/GBA link. Well, some of that became clear at E3, and for the new Zelda no less.

one for one plus five