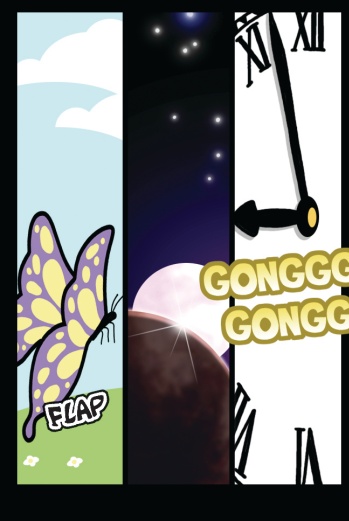 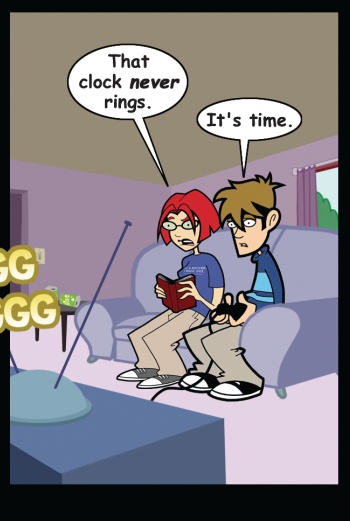 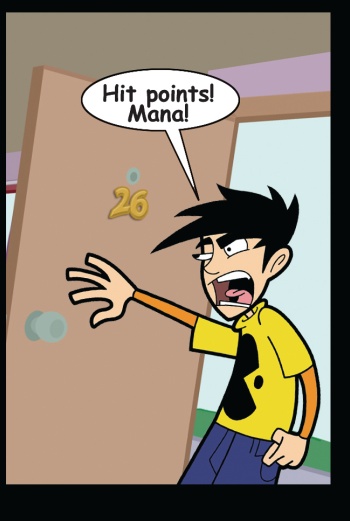 I couldn't be happier.

Obviously, I'll have more time on Monday to depict the circumference of my joy, as the spectre of bitter Continuity holds Penny Arcade in its bony clutch - but in the short term, hooray. Gabe's into roleplaying games again, this almost never happens, so games I thought I'd never get to play (like Lost Kingdoms, let's say) are now what I'm going to be doing all weekend. What powerful forces are at work? Do not doubt that we will reveal all.

Going from just one or two comments I've made, you could realistically come away with the assumption that we don't get along very well with PvP's Scott Kurtz. I think it's more true to say that we have a very, very mild rivalry with him that isn't intense enough to register on any equipment, but present enough to keep our respective work honest. Actually talking with him on the phone, he comes across (in my opinion) very much like Gabe or myself, perhaps even more so. He has a vicious streak that rarely bobs to the surface of his work, but I think he's really at his best when he cranks up the Fucker Machine. He's got a series up right now on "Alternative Comics" that I think is fairly harmless, especially when compared to his "Guest Artists" week, where he didn't actually have any Guest Artists at all, and instead drew scalding parodies of other webcomics. Regardless, Scott and Controversy must have gone to College together, because they're always hanging out - Comicon, which I didn't even know was real before yesterday, has like six pages of discussion on his recent strips. There is something delicious about crises that are so tangential to actual life. It is luxurious to invest ourselves in them.

GideonTech has a photo-rich expose on just how to get that Afterburner of yours installed. I was really trying to be more wry than came across in my discussion of the device. I'm still of the mind that you'd be well served having it installed by someone with some experience, but these Gideon guys lay it out pretty well - this article would be interesting to me even if I didn't have a GBA, both Adam Curtis' clever technology and the procedure itself make for satisfying geekery.

Always craving more from the advertisements I receive, I'm often titillated by the latest fad in spam. Have you seen these new ones? Perhaps I should say "old ones" - apparently, though e-mail is a new vector for it, some mutation of this "please hang on to our twenty million dollars" thing has been around since 1980. Someone was actually killed trying to acquire this imaginary wealth, they flew to Nigeria and everything, all because they received a specious, completely anonymous dispatch from a total stranger. Myself, I furrow my brow at every man, woman, and child I meet, secure in the knowledge that they are trying to kill me. I'm always shocked to meet someone who doesn't operate under this assumption, but I think those people are just trying to be low key about the whole thing. On the whole, this makes me feel like I.Q. is going up on average. But then, like today, I get a mail from a young woman suggesting that Bill Gates is dividing up his wealth based on who can forward the most e-mails. I mean, think about that for a second.

in a cage of wire