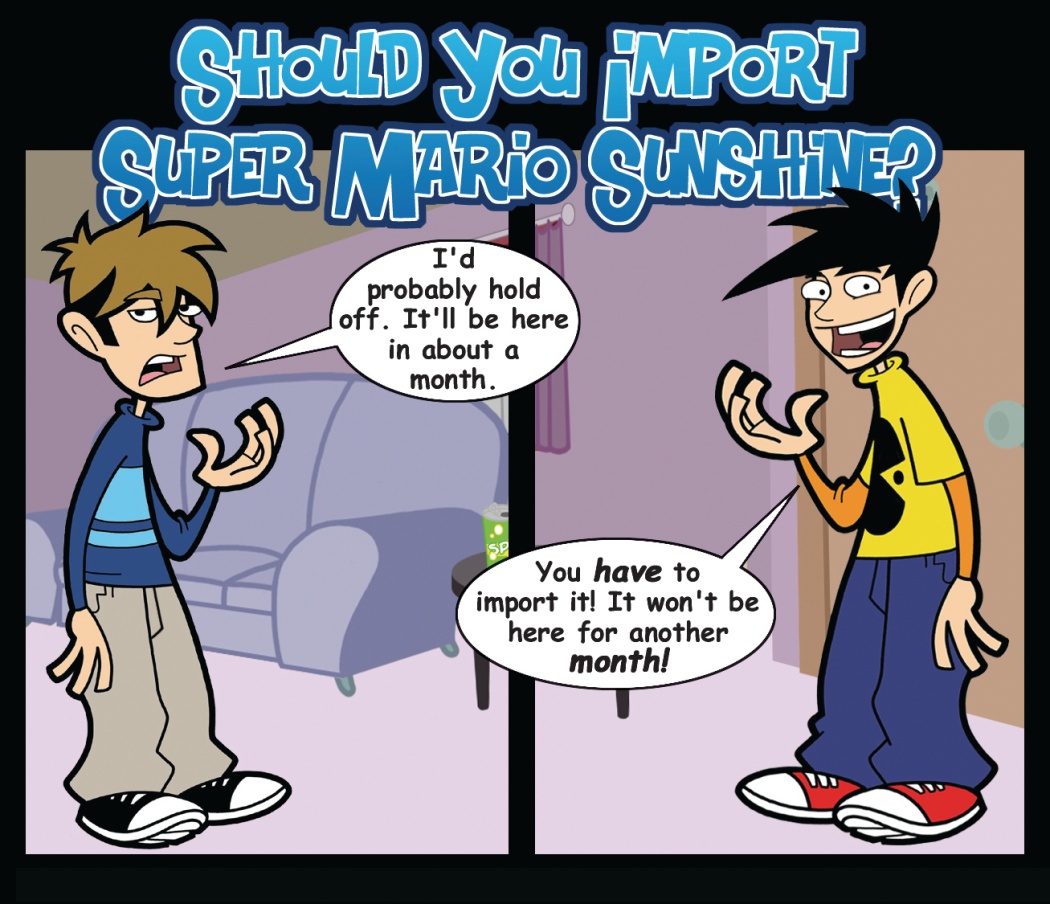 If you're the owner of a modded GameCube, then it seems clear that you have a choice to make. As a game, Gabe will tell you this much, Japanese is really not required to enjoy it. Much of the plot is handled in cut scenes, and these cut scenes are in English, for God's sake. The freaky inhabitants one meets are probably saying something, hinting perhaps at bonus "shines" which are this game's coveted item, but we haven't run aground so much as once in the acquisition of forty such treasures. Of course, we have a crew of five or so when we play it, and someone typically has some startling new plan re: what to "squirt with water" or "crush with our ass." The strip communicates each of our positions on the import issue quite succinctly - really, it's the same position, we just chose to emphasize different words. Where Gabe is concerned, the glass is always half stupid.

We've been very fortunate lately with the stuff we get from overseas, Raging Bless (or Raging Breath, you know, whatever) is completely in English. Voiceovers, mission intros, menus, everything. The manual (which is in Japanese) even contains a quick reference guide, in English from top to bottom. So, go global hegemony, I guess. There's no valid arguments against having the game, unless you are a person that detests fun. Hopefully we'll luck out on GunGrave as well, but that might be pushing it. GunGrave, if you'll recall, is Sega's new shooter where you you must kill absolutely everybody. Coincidentally, that is one of my favorite genres.

Someone sent me an interesting essay about "playing to win," as opposed to "whining all the time," which I found illuminating. Perhaps you will, as well. It concerns Street Fighter primarily, at least, the examples are often drawn from it, but the perspective has value applicable in any case. Hot damn, that site is full of great articles. Looking closer, "Playing To Win" is part two of a series, there are also parts one and three available. In the time between writing that last sentence and writing this one, I've read several more articles focusing on Game Design. They're great. Also, he gets ten points for the WarGames reference.

Monkey put out the call for audio to comfort us on our trip down to San Diego, because unlike Gabe's car, we will have no GameCube with tiny monitor to give us succor. Human beings who read the strip heard the call, and deluged us with hour upon hour of mellow, oak-aged entertainment. I'm terrifically grateful, chiefly for the copy of William Gibson reading Neuromancer, but everything else is also great. We'd have an endless supply of books on tape if we were taking my car, but we aren't taking it, so that's rather like wishing you had a friendly robot. What we have is a CD player, so we need to make the best of it - grabbing that Plextor 40x and a one-hundred spindle seems almost prescient now. We've got some Arthur Miller plays, a reading of Ghost Soldiers, and some Lewis Black to keep us company, but even so I fear for my mind at hour ten. I've tried (however unsuccessfully) to steal the new Patti Griffin record, which probably serves me right.

I can't shake off this uneasiness about the con. Maybe a twenty hour drive with nothing to do but brood about it will help.

We will be gone this week, it's true, but that won't affect the strip schedule - in fact, we're bringing down Gabe's tablet, which is the dauntless crucible of our operation. Well, I guess it was daunted just the once, but there were extenuating circumstances and honestly I'm willing to overlook it. Scott Vaio will also be making the trip, however I will likely be completely exhausted upstairs by the drive down to Comic-Con. If there isn't a post to accompany the next strip, it's not for lack of love.