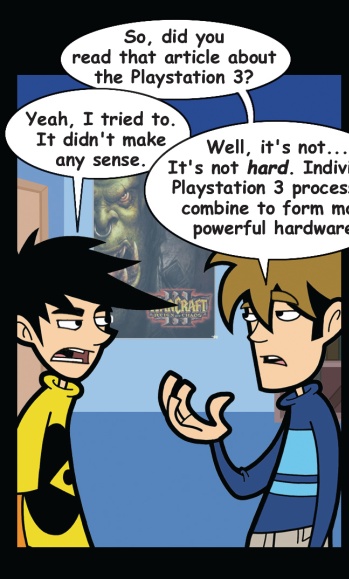 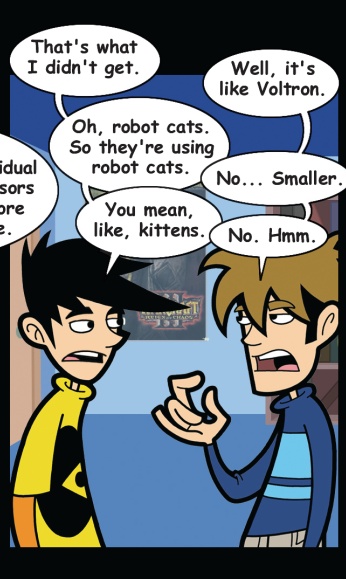 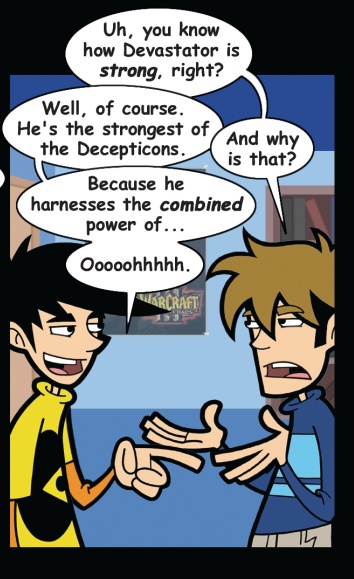 The longer I stay away from home, the greater the possibility of a psychotic break. I have lost my mind on three separate occasions, so I am fairly well acquainted with the sensation. I do not doubt that another day out would have landed me an extended stay at Chez Crazy.

We have fashioned from spare pixels a comic strip that we hope you will enjoy. The first thing you will notice is that I haven't drawn it, I'll handle Friday's strip instead, but I thought that you might need more time to preemptively blind yourselves. The "Cell" chip that will potentially run the PS3 is not all that mystifying just to think of it, but it does raise some weird questions. I'd already heard about possible plans to hook up all Playstation 3 consoles online and let them collectively process my Tony Hawk, or whatever. The article linked above suggests that your television might have a Cell in it as well, so you'd select a certain brand of television and your games would run better. I thought that was crafty, and sort of strange, but I think a lot of stuff is strange. Just by way of example, I think that Comic Con is strange.

Let's talk about that for a bit. I recognize that this will be perilously close to (if not out and out) navel gazing, but you're stuck with it and I don't know what else to tell you. What's more, my navel is fabulous, so you might enjoy it. Let's see.

When I go to events where more than (let's say) ten people are going to meet me, it always makes me vaguely uncomfortable. Chief among my fears is that someone will catch on to the fact that we don't have any idea what we're doing. They'll see a frayed edge at the corner and be like "What's this?" and I'll be like "Fuck!" and they'll tug the whole operation into oblivion. The guy who does Bob the Angry Flower (his name is actually Bob Flower, it's weird) stopped by, and he was actually wearing a sort of headdress that made him look as though he were himself a flower. I guess he reads this, Penny Arcade I mean, and that completely blew me away. I told him so, and he said "Why? It's pretty clear that it's a hit."

In my mind, I cried out. Don't jinx it! You're jinxing!

I think of what we do here as balancing an ostrich egg on an unabridged dictionary which is then itself balanced on a slate-grey cone. We're supposedly a "gaming comic," but we're just as likely to relate a tale about specious crustaceans or tiny machines that violate citrus. You might come here one day and be like "Yeah, I can see myself reading that again" because we were on task, and then the next time you stop by I'll be talking about carrot cake soup or some new codec I think is really efficient. I don't have any idea how it works. I don't know what makes you come back.

So many people came by our part of Kiko's booth. I'd been scratching my right knee a lot, and it was red as a winesap. Did they look at my red knee? I met genuine heroes of web comicry (Like Robert Wigu, who does "When I Grow Up"), upon whom I lavished affection. Did it sound genuine? You are not a genuine person. I don't think that sane people have a mental commentary track that dismantles their life while they are living it. Luckily, sanity is no prerequisite for writing.

Every photograph I've seen of me from the con, I'm either closing my eyes or in the middle of a long vowel. Charming.

I appreciate your tolerating this stuff, if indeed you did tolerate it. I honestly didn't know who else to tell these things to.

On Friday, I will collate a list of web work I was exposed to at the Con, with introductions and so forth. I can practically guarantee that you'll be adding a few of them to your regimen.

On Friday, I'll talk about games - I promise. I did peek in at news from time to time while I was gone, and the only thing that caught my eye was the Black Hawk Down demo, which I tried to play last night but fell unconscious. There was also some interesting Tribes related news - I guess they aren't making Tribes: Fast Attack after all, which is mystifying, but whatever. They did announce that an unnamed third-party is already at work on a sequel, which is positive, though it will be interesting to see through what lens they view the Tribes experience. I'll tell you how tired I am right now: I can't even find a way to turn that comment into barb at TribalWar. I'm slipping.

if you want to make math