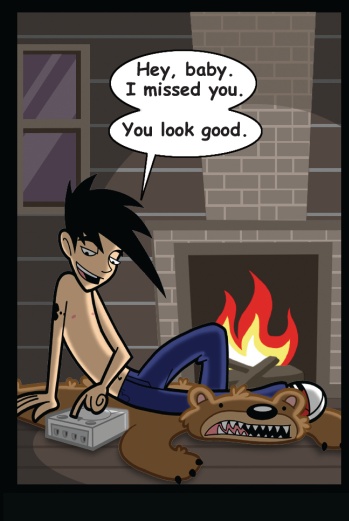 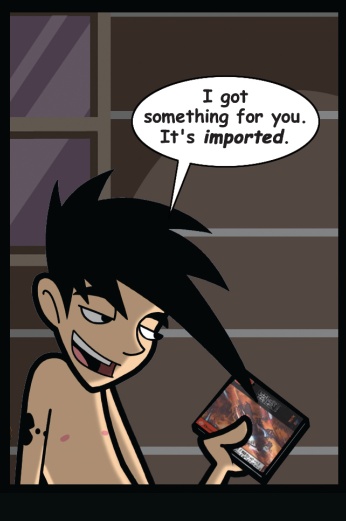 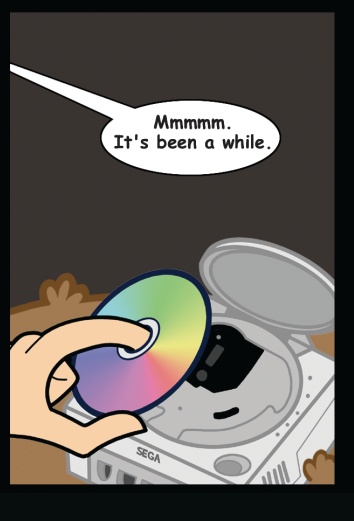 This is not the site to go to if you want to be sad all day.

As regards the strip, I was convinced we'd have our Ikaruga yesterday, so that I could spend today extolling it. Because I primarily game on the PC - regardless of what it might have seemed lately - and I rarely get a chance to play a good scrolling shooter on my platform of choice, because they don't make them. When a Star Monkey or a XOP or whatever presents itself, I commit my whole being - but really, how often is that.

Ikaruga is like the son I never had, if I even wanted a son and could possibly conceive of my being a father. IGN has a few movies you should investigate, if you hate aliens as much as I do. The third movie they have over there most properly shows off what I think of as the main game mechanic - if there's an official name for it, I don't know it, but for the purposes of our discussion we will refer to it as "polarity." As is common in this genre, while you're killing thousands aliens or robots or whatever you are also navigating clouds of enemy fire, usually glowy balls or somesuch. In Ikaruga, such balls are either white or black, there's probably a pun there but I'm scrupulously avoiding it, and you can choose to be immune to one or the other variety of ball. Some of these scenes have an almost platform feel to the gameplay, avoiding waves of alternately colored balls as you maneuver around large mechanisms that could not possibly serve any useful purpose. You might note that those movies are on IGN's GameCube site - Ikaruga will be arriving stateside on that platform in January, but we were like, fuck that noise. Any excuse to get out the Dreamcast and dust off the DC-X.

The latest patch for the Battlefield demo was very much appreciated, and I would like to thank Europe. It was good not so much for any play issues they might have resolved, if any - I wasn't having problems with the "game," as such. My only trouble was that the quality of the networking fluctuated so much from server to server that, initially, I thought that part was just fucked and I'd have to put up with it in order to get the rest of the good stuff, like hitting a man with a jeep when the jeep is going as fast as it can. I was prepared to do that, too - that's how good the rest of it is. I'd eat the apple and the worm and simply try to cultivate in myself a taste for worm. The main thing this patch does for me is make it easy to determine who is running a good server out there, and who is just some shitpie running a server on the same machine he's playing on. This explains why so many of the servers out there, far more than statistics would decree, are private - because it can be difficult to find a game that plays okay. New icons show not only if the server is dedicated to the game, but also if it's running well under current load. Hallelujah. Battlefield 1942 is the first game since Tribes 2 to actually feel like a proper successor to Tribes, and I have endless enthusiasm for it. When you're on foot pinned down by enemy armor, and one of your planes sails out the sky like the word of God and drops a bomb like some twisted stork, well, it's the sort of thing a man could write a poem about.

You rarely see any coverage of it, but Dynasty Tactics is out today - and I mean out out, not "shipping" out. Again, friends, I will direct you to IGN - and Tactics fans, you may want to sit down before you watch this. I mean, units of different types is one thing, very exciting, but larger scale tactics that rely on precise placement of different forces... You couldn't see it, but I paused a moment to hold my head in my hands. What the hell am I going to do? This sort of game appeals to my most basic need, to arrange objects in a manner that maximizes harmony and minimizes discord. They don't even have to dress it up like a game if they don't want to, and I'll still buy it. It's like Tetris. I don't even think of Tetris as a game. I do that kind of shit in line at the Grocery store, arranging the candy, magazines and gum until I am satisfied they epitomize their natural virtue.

I do hope everyone took the time to look over the LoD's Henry Jenkins interview, as it was highly enjoyable, and the sort of thing that should rightly be called "Gaming Journalism." It came in not one, not two, but three parts, and deals with the way gaming is perceived by the larger culture as well as other fancy stuff.