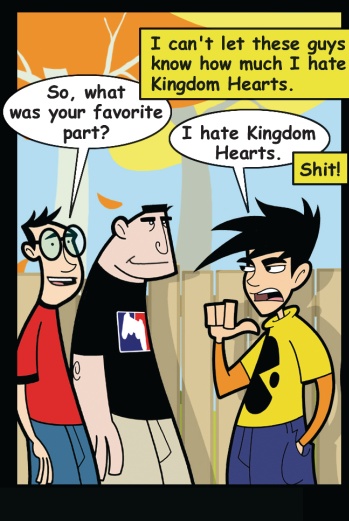 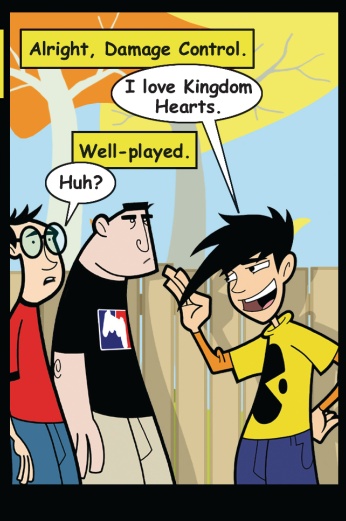 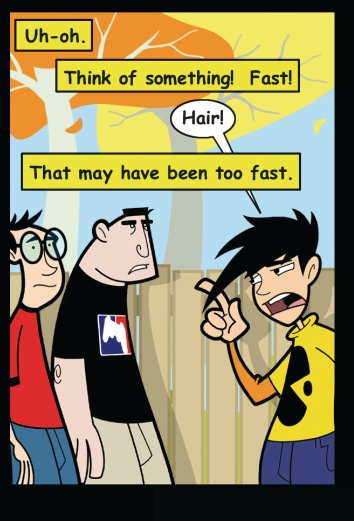 Perhaps Lord Gabriel will grace us with an audience later today, and detail for us why he has broken ranks on the critical Kingdom Hearts issue. Don't ask me though, because I don't know. He might have said why at some point, but he doesn't really enunciate. Half the time he talks it sounds like he's chewing on a superball.

Whenever I decide that it's time to jump on a P2P service and really start stealing some music, invariably I remember why I uninstalled those applications. Max introduced me to Kazaa Lite - that is to say, Kazaa minus Spyware - but my issues with the peer to peer experience don't have to do with pop-ups or cookies or anything else. They Are Two-Fold.

After about a week of bobbing my head to looped rap hooks and interspecies dalliances, I decide there's probably something else I could be doing.

Also, have you ever seen a raccoon? They're gigantic, they're like furry, grey sedans.

I was going to wait for Rockstar to send us their Grand Theft Auto: Vice City ads before I introduced this month's sponsors, but I'll cross that bridge when I come to it. Having sponsors to begin with puts me in sort of a predicament. For example, in August I probably played Atomica every day. Ordinarily, I would talk here in the post about a game I played every day, but with a big ad over there on the right that said "ATOMICA GODDAMIT," I'd never expect you to believe that my affections were genuine. The trouble is, we've actually been pretty lucky in who has decided to go with us, so it's been good stuff by and large. How discreet should I be, under those circumstances? It's new territory. Well, I'm not going to agonize over it anymore. You can play the games I play, keep the receipts, and decide for yourself.

The long and the short of it is that I played the Hegemonia all weekend. It is situated between galactic empire sims and real-time strategy, which for me accurately describes Heaven. I don't know if you ever played the Imperium Galactica series, it's from the same guys - if you do recall those games, celebrate with me right now by twirling your finger and saying "yay" very quietly so that we disturb no-one. After investing myself far too heavily in a limited demo, I was hoping I'd be able to just go grab it - but I think we're looking middle of November.

the best, cutest, quietest version of yourself