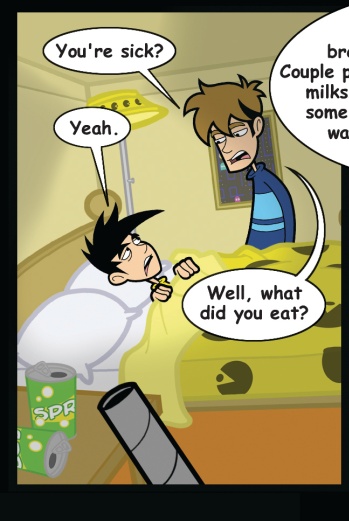 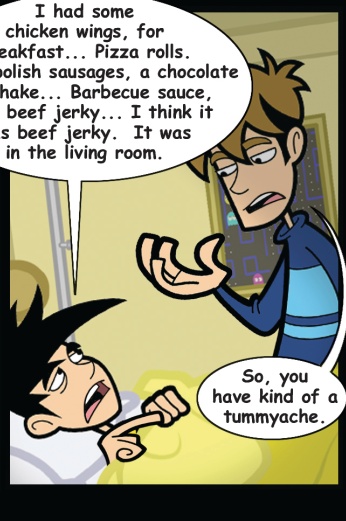 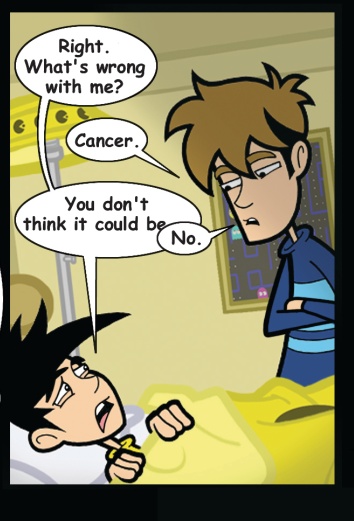 I received a mail once that asked in a very pointed way whether or not "Sprite" was paying us to include their product in our comic strip, the implication being - as it always is - that we had in fact sold out. Oh yeah, man. The truth is more ridiculous than sinister. Gabe doesn't drink anything else, ever.

This is not just hyperbole employed toward some humorous end. For the Christmas in September, everyone we know got him Sprite. He had no less than maybe a hundred and twenty bottles of Sprite, and since September 25th he has had no water whatsoever because, you know, why. His diet is accurately depicted in the comic. After nearly two months of this treatment, needless to say his body told him to go fuck off.

Last Thursday when I was over to write the strip, he was doubled up on the floor, curled into a crescent shape like a huge baby. He suggested that he might be unable to do a strip, so intense was his agony, and I told him he'd better rub some dirt on it because this isn't fucking Megatokyo. This is Penny Arcade. And if he wants to pull this Fred Gallagher shit, make comics whenever he feels like it, and punctuate the silence with what amounts to a stroke-mag for pedophiles he can get somebody else to write it.

Between my first post (!) on Friday and my third one, you might have noticed that I was starting to shift a bit on my Phantom Crash position. I began by saying that everything about the game was charming except the actual game. Let me tell you what I thought I was in for, and why the game appeared to come up short.

I like my robots to have a bit of heft to them. I am a firm proponent of the Armored Core series, and I thought that Phantom Crash would be a lighter Armored Core with a kind of pop sensibility. Indeed, everything I read led me to believe this - I wanted to have my heavy robots and eat them too, essentially. That's really not what it is. Phantom Crash is a very, very light RPG, in the vein of Diablo. It doesn't really look like that, does it - but it's a Goddamn fact. You take your character (robot) into a dungeon (rumbling arena) to get gold (New Yen) to buy swords (missile launchers). It's kind of stupid, and I'm embarrassed, but I made a fairly poor initial call on this game based on baggage I brought in with me. Just because I've come around on it doesn't make it perfect, though, and for people who like their mech games a certain way it's never going to feel right. Also, I'd love to see this rumored content disc become a reality, because the game is in desperate need of more arenas for the uniformly awesome robots. So, remember - Phantom Crash is not even a little simmy, it's not serious, it is a quirky as hell Japanese Action-RPG based on pure speed, I'm talking Unreal Tournament speed, Methamphetamines, with mech building, cat chips and a very talkative cast.

This week is another financial apocalypse where games are concerned. I mean, look at all this stuff. Resident Evil 0. Spearhead. Neocron. Sonic Mega Collection. Shinobi. Unreal Championship. Xbox Live. Hegemonia. BMX XXX. And that's not all, assuming we can scam early copies of Metroids Prime and Fusion from the Nintendo store. Starting to read some really exciting things about Prime - as I'm sure you know, you can play a bit of it in game shops now, it's usually on the demo machine. It ends right when you're getting into it, which I would imagine is by design. What a heavy load Prime must have been for Retro Studios, I can't imagine operating - let alone actually delivering - under the weight of a franchise like Metroid. It's not really a first-person shooter, as you'll find out when you play it. It's something altogether else.

Also, and I've waited with baited breath, The Importance Of Being Earnest comes out on DVD this Tuesday. I saw it three times in the theater, a number matched only by Memento I believe, and while it wasn't exactly accurate where the original play is concerned I found it scrumptious on the whole. When I was trying to find you a review to read, virtually every one I found was written by someone who is very angry, about one or many things, some things perhaps not even related to the movie in question. As always, my girl Mary Ann and I are of one mind on the subject.

ding a ding dang my lang a long ling dong