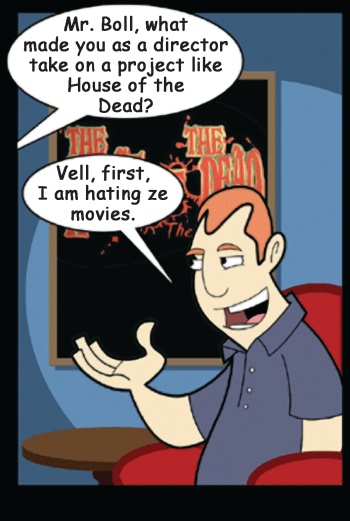 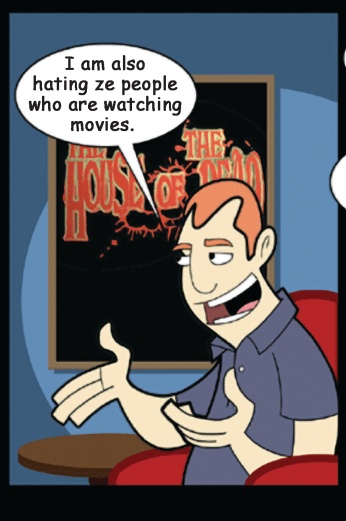 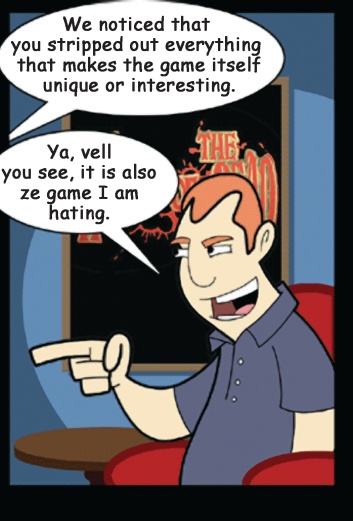 My head hurts so Goddamn bad. I'll be honest with you, it feels like my brain is the wrong size for this model head. I kept thinking about trepanning off and on the whole time I was at the midnight showing of Two Towers, not that the film wasn't enthralling or anything but I kept fantasizing about relieving the growing pressure in my skull. It's like four in the morning at this point and I'm trying to figure out if I need a Makita power drill, or if a simple Dremel would be up to the task.

Gabe and I will be back later today chipper and friendly, ready to serve you in a humorous - if not punctual - capacity. In this grim interim period between light and shadow, please entertain yourself with the House Of The Dead website, which has been our prime source of unintentional comedy since 2002. Today's comic on the same topic may help clear your palette. I do not doubt that director Uwe Boll is an excellent person with unique gifts, like making bird calls or some shit. But the stuff he does with movie cameras is a Goddamn war crime.

Okay, I'm back now. I'm sorry to have been away so long, but we had to take our friend Stephen to the airport. Stephen is French, or British, or whatever, and this gives spending time with him the strange quality of an alien circus. I've only been to that part of the world once, but I remember it being very far away.

No-one asked, but since that's rarely a prerequisite for my saying something I'm going to talk about this Two Towers movie the kids are crazy about.

To prepare ourselves for the midnight show, we watched the extended version of The Lord Of The Rings. I'm not sure if you've seen it or not, but since this is one of the very few cases somebody could spoil a movie you've already seen, I'll keep specifics to myself. Suffice it to say, things I wish they had gone into more detail on they did, and scenes that I thought belonged there magically appeared. Fights were extended in places and it was an extraordinary pleasure overall. Indeed, the only real issue I've ever had with the first film was the execution of the Aragorn/Arwen romance thing, but I can see quite plainly in the appendix of the third book that Tolkien actually intended something along these lines. So, all's fair. The first movie is marvy, and in my estimation very true to the source.

The Two Towers is a terrific, fun movie to watch that doesn't take the original material as seriously as it could. After seeing the extended version of the first, I wonder how much of this new movie was excised to make it fit in a theater. The first book has a lot of shit to communicate, yes, but Goddamn if The Two Towers doesn't have a lot of loving detail that would make life hard for a director. Choices were made and things rewritten, sometimes for reasons I understand and sometimes for purposes that are wholly mysterious to me. This is a matter wholly apart from whether or not you should go see it. You're going to love it when they shoot or hit the guy, Gollum is super rad, and if you need to sit still for more than three hours somewhere you might as well do it in a theater that is playing this movie. The only thing I am trying to communicate to you is that Peter Jackson is a filthy heretic.

I am just kidding.

All I'm saying is that you might want to leave your copy of the novel at home. And honestly, people, there's no reason to wear a cloak to this kind of thing. Sheesus.

let's keep that between me and you