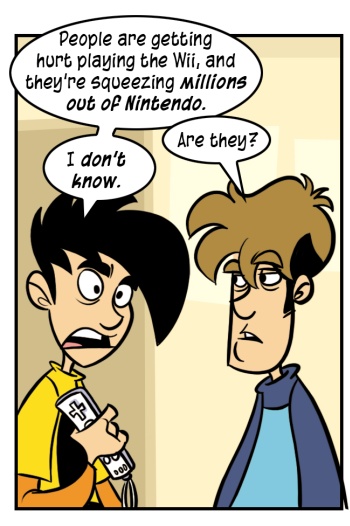 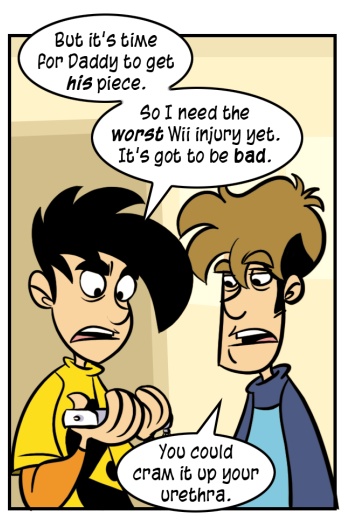 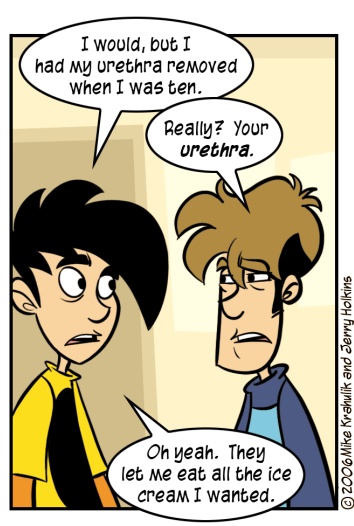 You can now get free replacement straps from Nintendo, but whether this is them admitting that they have done wrong or them taking out idiot insurance I think is an open question. In any event, there is a window of opportunity here for the savvy extortionist - one that could potentially incorporate an innovative orifice.

A friend of mine lent me a movie on VHS many years ago, something his family had taped - Police Academy or some shit. There were over seven hundred Police Academy films in total, and I'm sorry to say that I don't recall if this was the one where there was an orangutan, or the one where the sergeant went skinny dipping.  Being a videotape, whatever had been recorded before Police Academy was still there after the movie had stopped - certainly, this led to many thematic incongruities.  But that was the first time I'd seen even part of Aliens, a rated R film, which meant that it was in the service of Satan who is the Devil.

I often wondered if it was the illicit, secret quality of the viewing that jacked up the enjoyment, but I have (by this time) seen the first two movies perhaps twenty times apiece, and they endure. If you would like an index of my enthusiasm for the series, well, I liked Alien 3. You may have watched Alien 3 and thought to yourself, Who Is This Even For? He stands before you.

Imagine my mingled emotions as I learned Sega had picked up the license, and then immediately handed it off to some extremely well-known developers: Gearbox and Obsidian. I have a sneaking suspicion that Gearbox will create a capable, largely traditional shooter experience. I'm like a prophet or something, I have visions.

My reaction to Obsidian is more complex.

You will recall that when given an opportunity to eulogize Troika, another ex-Black Isle studio upon which many hopes were hung, I instead chose to kick them repeatedly in the ball region. I don't feel especially bad about it, they released broken game after broken game - games we are still fixing.

The prospect of an RPG penned by Planescape's Chris Avellone utilizing what is possibly my favorite franchise should inspire a spontaneous cartwheel. But both actual Obsidian products - Knights of the Old Republic II, and and sequel to Neverwinter - were not delivered whole to consumers. Knights in particular is currently the target of a restoration project to reintegrate critical content included on the disc itself, but removed from the game. I suspect part of the issue with both developers is the unwillingness of publishers to truly stomach the budget it would take to execute a world-class role-playing game. That is not a comfort to people who have purchased these products, it's just something I tell myself at night.

Three years ago, I would have called it a sure thing. Now, I require proof - and more proof.

Wednesday's Child's Play Charity Auction and Dinner was (I believe it is fair to say) ridiculously successful - photographs of the ridiculous success in progress may be discovered here. Powerful winds took out power to the office, making Kiko's update of the official bar difficult - we'll do it as soon as we're able to. But the new total, as of yesterday, now sits at $760,000. That's Earth Dollars, not shells or bottle caps. Yes, that's just this year. My hope is that we will top eight hundred thousand, because the rhetorical payload is simply too potent: Child's Play will have, officially, raised "millions" of dollars. Specifically, you know... two million.  I was going to downplay that figure, but then I remembered that it was two million dollars.