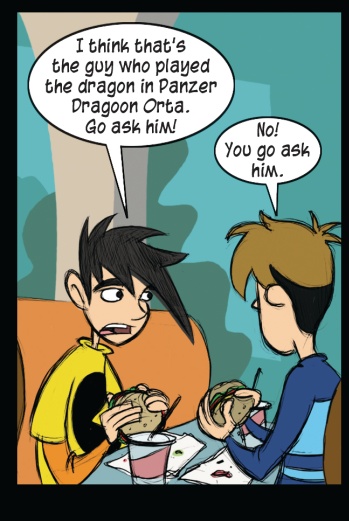 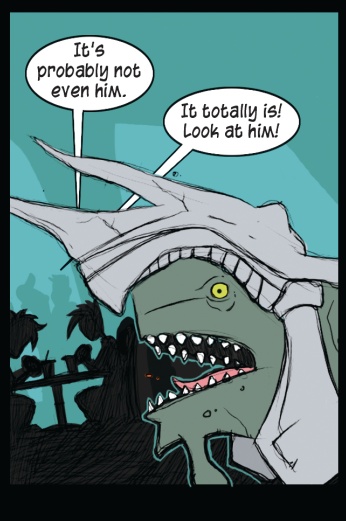 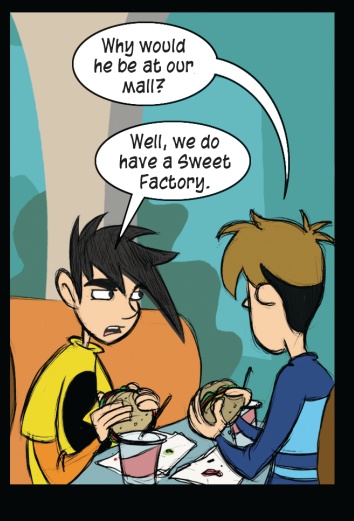 I'm not sure if you've had a chance to check out Panzer Dragoon Orta yet, as it did only hit this Wednesday. Good god. Now, before I launch into full scale hyperbole about the game's divine heritage, we did make a comic about it that I found very amusing.

Because I have a very poor memory, it is often the case that I will be happy without knowing why. This has happened with games prior to Panzer Dragoon Orta, which is a name I have already begun to tire of typing, so let's go with Panzer or Orta or PDO or something from now on.

So I woke up yesterday and even droll hues seemed lively. My English muffin was more English, yet at the same time muffiner. I noticed my SimCity 4 manual, and though it too made a sound like music that wasn't it. No, it was something with Dragons.

I recall that Official Xbox Magazine - in a coverdisc they will never top again - put out their December issue with Splinter Cell and Panzer right on there. I also remember that, while I liked Orta very much, it was not terribly difficult or scary unless you were a perhaps an adorable kitten and not a seasoned gamer. Well, those days are over. It may invigorate you when I say that they have jacked up the difficulty, jacked it up, sir, bring a teddy bear because you will require immediate comfort after each level. PDO really seems like a nod to the shooter proponent, the old school, and it has the feel of a loving pet project. It is also an unforgiving pain matron who delights in your misery!

It's actually very nice to fall back into a fairly pure shoot-'em-up without stealth elements or squad-based tactics. The game is like a vacation from complexity. I'm not even saying complexity is bad, what I mean is that I think it is a development fad right now. You can agree or not agree with that, I don't have any intention of keeping track. There is also some discussion about whether or not the game has enough replay value, being a scant two hours in length. For the record, I've played it for three hours, and I haven't even beaten it yet. But shooters as a genre have always defied a mechanical formula of determining play time - "One can complete all objectives and defeat the final boss within X hours." If you rent it and see it as a sort of two-hour tour through the luscious and surreal world they've created, you'll probably enjoy that very much. But for someone who is into shooters, it's never A to B objective stuff. It's, can I destroy every fighter of every wave in this level? Can I get every power-up? Success and even the game parameters are more personal, self-directed, to the genre advocate.

Since reading Neuromancer at age twelve, William Gibson has always occupied a somewhat celestial position for me. Two stars made up his glasses and another fifty-six made up his apocryphal typewriter. The only reason I even knew there was a William Gibson in the first place was the game based on his work, so I guess that's one more thing to thank videogames for. In any event, when looking for information about his new book Pattern Recognition, I stumbled upon what was apparently his personal site, with a tantalizing "Blog" link that was bereft of content at the moment. Lo and behold, what should I notice over at the mysterious and sensual Emma's but a notice that Mr. Gibson had begun blogging in earnest. A thousand joys!