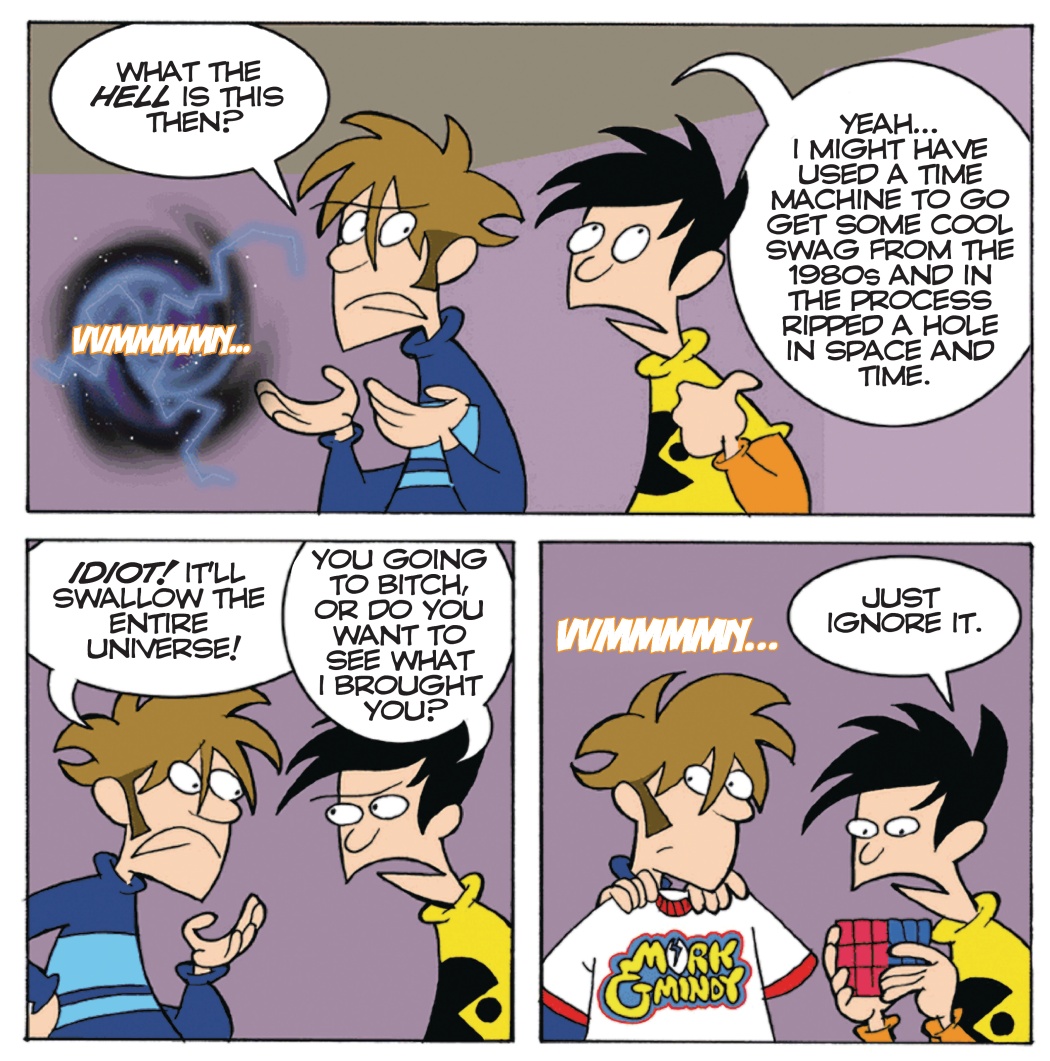 Here is the dream my exhausted mind produced after this convention:

A combination of Greg Kasavin and our friend Stephen from London was coming into town, and we had decided to have a LAN party at my house from the sixth grade. I assure you that this is not an exaggeration, in fact, I am no doubt leaving out a host of other incongruities. In any case, many of the dorks in attendance claimed (rather facetiously) that we were going to "go out on the town" and "meet some laydays" when the truth couldn't have been more remote. We were, in fact, "staying right there" and "Playing Soldier of Fortune 2." The Greg/Stephen hybrid played along, asking in an incredulous manner what a "woman" was, anyway. I said something that I though was quite hilarious while I was dreaming. You be the judge.

I said, "I believe it may have been, at one time, an acronym that has now passed into standard lexicon." That really got them going, and I punctuated the raucous belly laughter crying out the word "Vestigial!"

I am slowly regaining my composure after the event. I did put up the guest comic that Scott sent us last night, and don't forget that we'll have a strip over there on his site tomorrow. I'm looking forward to writing that today.

I don't really know enough about my own country to make generalizations about the different areas we have, which makes me a piss-poor bigot. I simply don't have the lacerating turns of phrase and demeaning language apt to different areas. I will say this, however: I am now of the impression that people from the middle of Missouri and Kansas are about the nicest people you could care to meet. What's more, at least compared to where I live in Washington, they have no accent to speak of. I had assumed that once I penetrated the membrane that surrounds the Northwest, physically and culturally, that I would be exposed to an alien landscape where vaguely organic creatures would communicate via scent or minute flashes of light. As it turns out, they just have really good barbecue and look more or less like human beings.

The San Diego comic convention is very large, but I do not know that as a social experience it can compete with something smaller. The second slow day of the con, I mean, shit. Gabe and I were playing Puyo Pop until somebody would come up, sometimes with their own GBA or SP, and then it was on. I even got a chance to play some of that "Four Swords" mode on the new Link to the Past. And since Brad is there to do all the commerce, we never even touch that stuff. When you come over to our side of the table, it's all conversation about whatever the fuck you want. We will certainly be back to that part of the country, in fact, that part specifically - human beings came from hours away, and I want to reward that. They were so appreciative that we got out their way. But many of these people said that they came to the con in question just to see us. When I bought a bootleg copy of "Hero," though, I saw on the bag that some of them had paid eighteen Goddamn dollars for the privilege. If that's at San Diego, fine - that's one of the biggest, if not the biggest thing of its kind in this country. There is a lot of shit there. But Fuckhole's Dog And Pony Show at the Kansas City Convention center, let alone us personally, it's not worth it. So, we'll be back. However, the plan is just to rent out the conference room of the hotel we're staying at, buy a bunch of pop and snacks, and if you want to hang out with us or get something we're selling, that's fine. This is something we can do anywhere, and don't think that's not the plan.

There are apparently many, many Megatokyo fans who also read Penny Arcade, if the people we met at this convention are any indicator. That means to me that though we may not be an exact fit thematically, hopefully the SakuraCon thing will still be alright. In fact, I noticed in Piro's post today that he mentions "two other well known comic guys," I think he might be talking about us, I don't know. He is possibly suggesting that we might not want people to know we are going, and nothing could be further from the truth. It is apparently SakuraCon that doesn't want people to know we're coming. Their director of relations practically begged us to attend to the show, but even after repeated requests they haven't put us on the site. It's perfectly fine by me, they can mention us or not - they can put our names on a password protected page in an ancient language known only to a handful of scholars. If you're reading this, then you know where we'll be and that's the important thing.

from the aeroplane over the sea