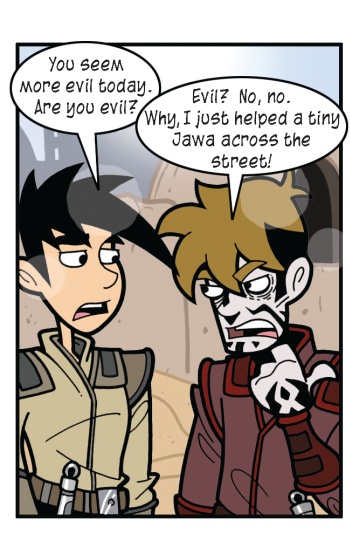 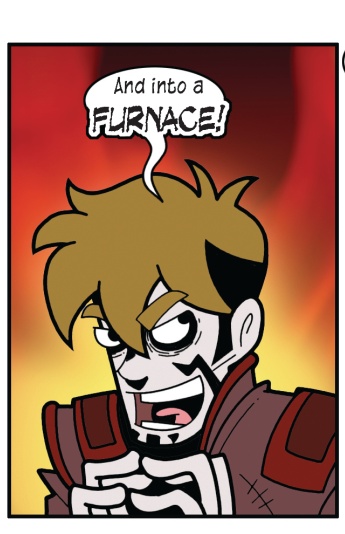 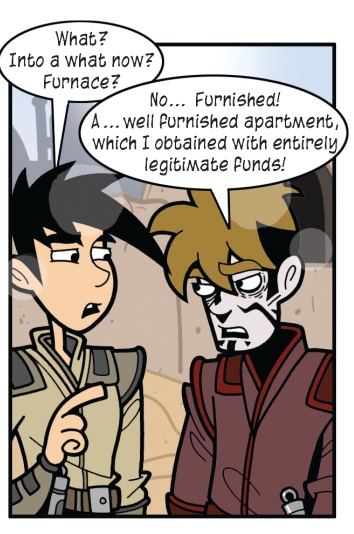 Because Gabe's shit is all out of sorts on account of his move, I'm picking up the slack and playing enough Knights Of The Old Republic for two men. I do this while I sip twelve year old Scotch neat. For you, dear readers. For you.

You character begins to shift in appearance as their actions push them toward to the dark and light sides of the force, and it seems like that would sort of give it away to people. I know that I tend not to trust hunched over weirdoes who cackle all the time, and I can't be the only one who doesn't find that sort of behavior comforting.

Someone came by the booth and asked me if there were a lot of webcomics there, and I just stared for a moment. The answer to the question is a definitive Hell Yes. They are everywhere, and though sometimes you may need to track them like game through the convention they almost invariably want to talk to you. And there is wond'rous variety, as well - all the way from individual guys walking the floor handing out homemade books from their comic Pirates Cove all the way to to Super Dimensional Fortress KS-1, The Keenspot booth, which is absolutely ensconced by artists who do their work on the web. And of course, let us not forget loose coalitions like Dumbrella or Pants Press, who pitched in as groups and secured a beachhead in that cacophonous expanse. These are the places I went to when I would leave for a half an hour or so twice a day, because I would never be able to see anything unless I explicitly took the time to do it. The thing is, and some people figured this out, you can actually get a very interesting cross section of the show just by standing around over where we were. Situated by a main thoroughfare, a terrific stew of mortals would ooze by and sometimes even stop. Someone stopped by and told me that Wil Wheaton was there, but since I was not yet a regular reader I only knew him from his work on Star Trek, which culminated in his becoming a God. If you're going to go out, go out on top, right?

So that night I invested some time into his site and enjoyed it quite a bit. I know that his blogging is something like a phenomenon, but I had not really indulged myself in it until then. He stopped by later, as we would eventually depict, and I felt like I knew him.

If you do not already have your favorite Dumbrella sites bookmarked for quick access, I would advise you to go to their hub and select a few. The trouble with these assholes is that I can never think of a word to describe them aside from Brilliant. I have a few of their books right here in front of me, the ones I didn't already own in any case - John Allison's brilliant Scary Go Round collection, which Brenna chortled at the whole way back on the plane. Of course, Robert J. Wigu's brilliant When I Grow Up collection never hurt nobody, unless they have a cracked rib and mirth causes them to suffer. It goes without saying that Jon Rosenberg's brilliant Goats books are brilliant. I was not yet familiar with Creatures In My Head, but I have a feeling that creator Andrew Bell simply closes his eyes, and whichever monster makes the most noise gets drawn. Brilliantly.

Robert Flowers continues to delight with Bob The Angry Flower, and I believe that as of right now I own all his books as well as a very informative poster. Travis Fox, who I met in Kansas City of all places and who makes a potent impression, stopped by with the newest issue of Foxymoron. People I had never seen before came by with issues one (excellent!) and two (also very good!) of Scurvy Dogs, and assured me that pirates were, in fact, the new monkeys. Fine by me, mister. I just don't want no trouble.

I'll talk more later, about something. Of this you may be certain.

i've got a secret vocabulary