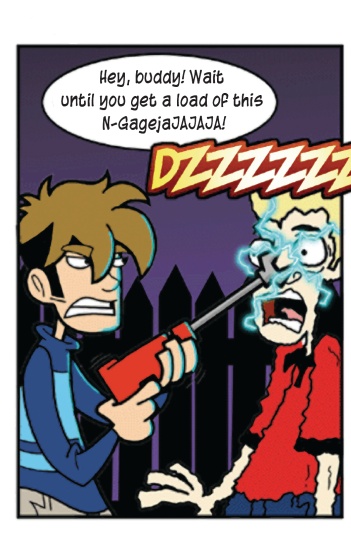 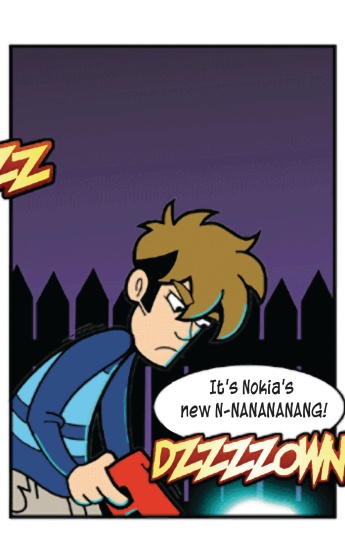 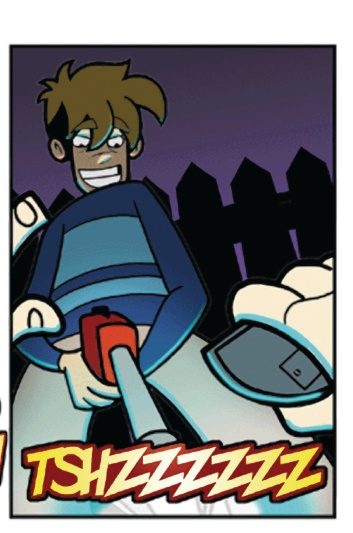 It's now 4:13 in the morning. I got home at about eleven o'clock and starting moving my mail over to Thunderbird, the Mozilla mail component that Scott said Gary said had nice spam filtering. I imported my old mail into it for some reason, to accelerate my hair loss I think, but I've trained it like a faithful pup to ferret out spam and viruses from of a sample of fourteen thousand hand-flagged mails. I am at the point where coffee just makes my teeth vibrate.

The new comic strip concerns the N-Gage Special Forces, a crack group of liars and miscreants whose job it is to spread lies about the N-Gage. When I say lies, I mean things like telling people that it is good or that someone should buy one with money. I wince when I look at it. When it comes time to account for why it is such a monumental fuck-up, in my mind I see a group of men all around a long conference table. They all shrug in unison.

I asked people to tell me if they could recall the community standing up, claiming a game for their own, and taking over development on a game besides Allegiance - and readers responded, revealing a world of wonder and limitless amusement.

Virgin Interactive's Subspace is a mixture of of Asteroids and Deathmatch, which I think we can all agree is probably a very good thing. Something it was not, however, is a financial success - and Virgin closed down the servers, as you might expect. Fast forward to today, where player-run servers are the norm, bizarre mods have taken shape, and the entire game has been reverse-engineered to allow access to the undercarriage. Many players invited me to give the game a shot, and I have a mind to do just that.

I would be disappointed, yes, disappointed in you if you were not familiar with Bungie's Myth. Almost universally adored, and luscious with (then novel) 3Dfx accelerated graphics, Myth games were good in virtually every way one can reckon a tactical fantasy game. It had a beautiful interface that allowed access to a wheelbarrow full of great maps and gametypes, it was essentially the cat's pajamas. We're all aware that when Bungie became a part of Microsoft, Bungie's own multiplayer matching service would eventually become a thing of the past. Of course, this was long after I had started playing other games - so I was not aware that the community had risen to the challenge here, as well. I had heard about this more recently, when gamers displeased with the state of Myth III successfully petitioned Take-Two Interactive to gain access to the source code in order to fix the game.

Think about that for a second.

In any event, their legacy is real - modern, playable versions of all three Myth games, and a matchmaking service to tie it all together. It makes me want to clap.

jam after jam of inaccurate songs