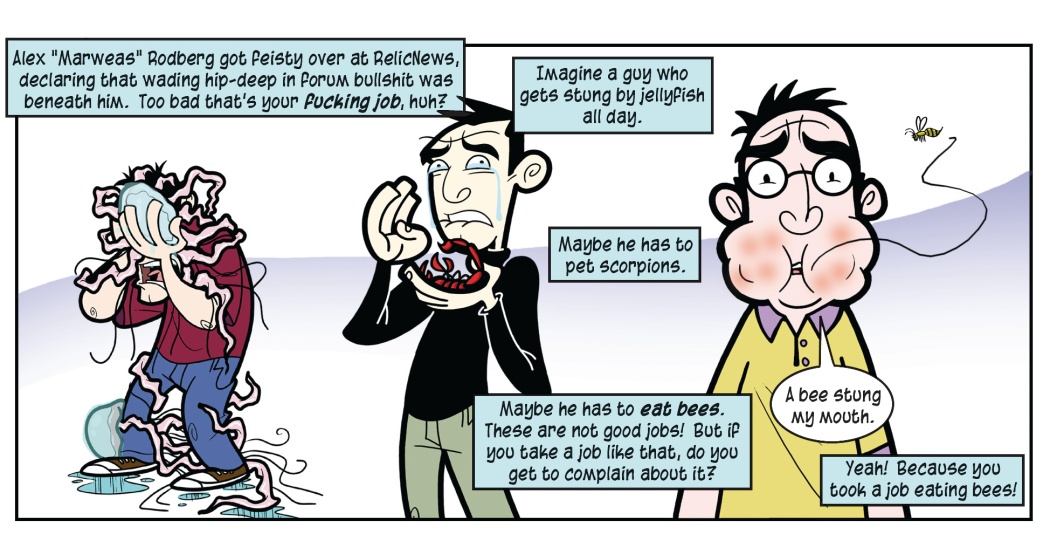 This strip won't make as much sense if you haven't read Alex "Marweas" Rodberg's now legendary quote from this RelicNews forum thread. And let's be absolutely transparent - he and I do not disagree materially on the quality of forum discourse in the most general sense. In fact, I believe I'm quoted as saying that they "appear to incubate and empower a twisted menagerie of fucking assholes." And no-one knows better than I do how difficult, almost impossible it is to please truly dedicated gamers. These are all matters quite apart from how the public face of a company should comport itself.

When discussing comparatively inexpensive games a week or so ago, I mentioned Port Royale in passing. I've played it for an additional two solid days since then, and what was once infatuation has blossomed into a genuine commitment. Comparing any game to the original Pirates! is rank heresy, I know - it's like comparing your Uncle Bob who plays the harmonica favorably with Jesus. And Sid Meier is preparing a follow-up to his classic Pirates!, and it will probably be excellent because everything he produces is excellent. I have even heard that his tears can raise the dead! Port Royale, though, takes the Pirates template and coaxes it into even greater brilliance. To my mind, the greatest addition is an extremely dynamic economy of twenty or so commodities - and check this out. Using an interface that will fucking enrage you the first time and then it's not so bad, you can set up completely independent convoys of ships with programmable "Trade Routes" that can - if well managed - make you a lot of money while you take quests and curry favor with governors. You can make it as complex as you'd like to, dropping things off at special buildings you've constructed in different places, selling and buying at certain prices, choosing which towns you'll repair in, you get the idea. The ones I've made are fairly basic, only three cities tops, but they do alright - I haven't tried any of the downloadable routes from Fame n' Fortune yet, but I shudder to think of the profits one could garner with a spreadsheet and a lot of free time. I have no idea how this game got to be thirty dollars, but if they're going to keep selling it for that don't ask any questions. I wouldn't even bring it up.

The server is so busy these days that I have a hard time getting images up when I want to show you something, and ninety percent of the time that's probably a good thing for you. Cats in lederhosen or cats in other traditional garb are probably not something you need in any great supply. However, I had some Tron 2.0 screens I took that might interest you, just as regular geeks and not necessarily Tron zealots like myself - pictures of the Internet, what it looks like inside a firewall, I was essentially on safari. I wish there was more Tron left, I'm sort of depressed now that I've finished it. It's going to sound stupid, but I felt better knowing I had someplace else to go.

he's in the stall