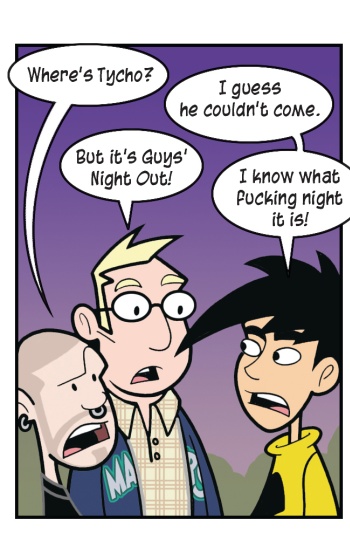 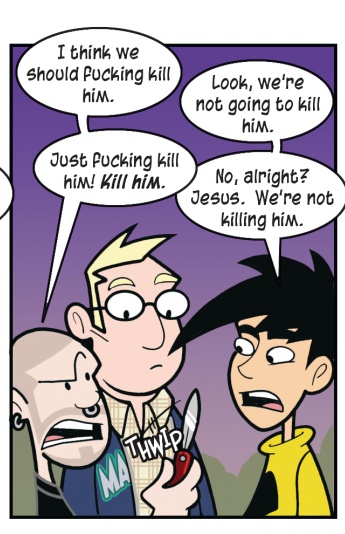 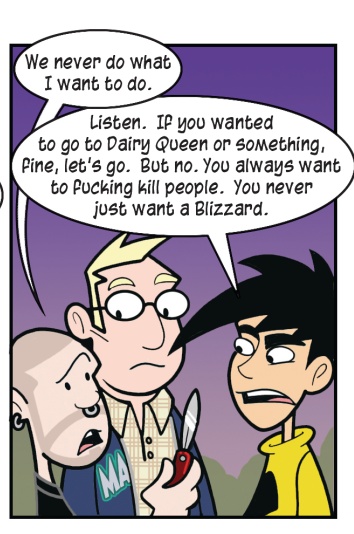 Guy's Night Out for us is essentially the same as Guy's Night In. I don't think they like it very much, but we take the Cube over to Lanwerx a couple nights a week with the GBAs and play Crystal Chronicles. It's just some neutral Switzerland everybody can get to.. We don't, um... pay them anything, we just go over to the couch and plug in our own console. I doubt that's regulation. They haven't said anything yet, though I really try to emphasize it when I purchase a Jolt Cola from the vending machine, as if to say "These Quarters Weigh A Thousand Of Your Earth Pounds."

How Penny Arcade is interpreted by people has always been source of great curiosity for me. We know perfectly well that we are selfish and self-indulgent with our comic. People have long complained about the fact that they must, at times, read the things I have written for them in order to appreciate the strip for a given day - it's nice to know that my contributions are inconvenient. Here's a question from this Comixpedia Community Interview thread that might not be selected for the actual feature:

Some people feel that your comic has changed focus in recent years from more openly accessible jokes to more obscure "inside" jokes that generallly require an explanation along with the mornings column. Is this a noticeable change from your perspective, and would you ever consider intentionally swinging your focus back to creating more audience-friendly strips again?

First of all, it's very strange to hear that our comic has changed focus in recent years, as the entire chronology of the strip only spans "recent years." In any case, I don't grant your assertion - as the person who would be writing the text that accompanies these confounding comics, the need for reams of exposition has actually gone down. At any rate, we've been abusing the readership of this comic in the way you describe since its very inception - this is in no way evidentiary of some recent trend. Take into account the fact that ninety-five percent of Penny Arcade content is "inside" jokes to most people anyway, simply by virtue of the subject matter. Raikoh's fascination with dark creatures is not a topic poised to conquer a mainstream audience. Indeed, it is an obscure comic based on a single, almost unknown character in a hard to find action game for a specific system. Making openly accessible jokes - like the one yesterday about Duck Cocks or something else that doesn't deal with issues internal to Gamers - well, that just gets us hate mail from people who feel we've spurned our Gaming Roots.

In the way that a Political Cartoon might, we sometimes deal with personalities or events which are timely and require some knowledge of their circumstances to enjoy them. Imagine looking at a cartoon of that ilk - you would necessarily have some kind of animal, perhaps wearing a tie, and both the animal and the tie would be emblazoned with a name of a concept. Then, the animal might be on top of something else, perhaps another animal, and then a man with a cigar would stand astride a globe which was wearing a wig.

Let's say that this comic details the complexities inherent in global commerce.

I don't assume that everyone keeps up with the latest 3DMark Outrage or N-Gage Marketing Scheme or Spectral Console Announcement, but these are things I think about all the livelong day. And when it comes time to do a strip, these are actual events with ramifications for gamers that we think are important - they're going to make it into a comic, and I'm not going to apologize for it. When it happens, I discuss the event in greater detail in the post, providing links to pertinent information or other perspectives. I mean, the alternative to not writing about it in the post is to a) offer no context for our comments, or b) never deal with substantial issues. There's a whole section of the newspaper devoted to that sort of comic, and it's about as funny as an epitaph.

Creating "audience-friendly" work is not our aim. Now, we hope that you do enjoy it. But I do not perceive the relationship between myself and the reader to have much of a hierarchy to it, where either we're up here and we transmit our holy artifacts to the public, or you are perfect creatures to be adored and worshipped with the work of our hands. I see it as entirely lateral. We produce comics, and we place them unceremoniously in the space between ourselves and the readership, who are then free to like them or not like them. Any romantic notion regarding these transactions has been boiled away by years of actually doing it. For the same comic, I will receive both death threats and handjobs. The only thing I know how to do is write a comic that amuses me - amusing a fluid matrix comprised of a hundred and thirty thousand strangers seems to me quite impossible, and so my system must suffice.

So, short answer: We can't swing our focus back to making "audience-friendly" comics, because we never swung it away. Even saying we have a focus is being pretty generous. I'm sorry if you don't understand my comic, though - I'll try to make it stupider so you and your fucking retard friends might choke on something when you're laughing at it and suffocate.

what we need more of is science 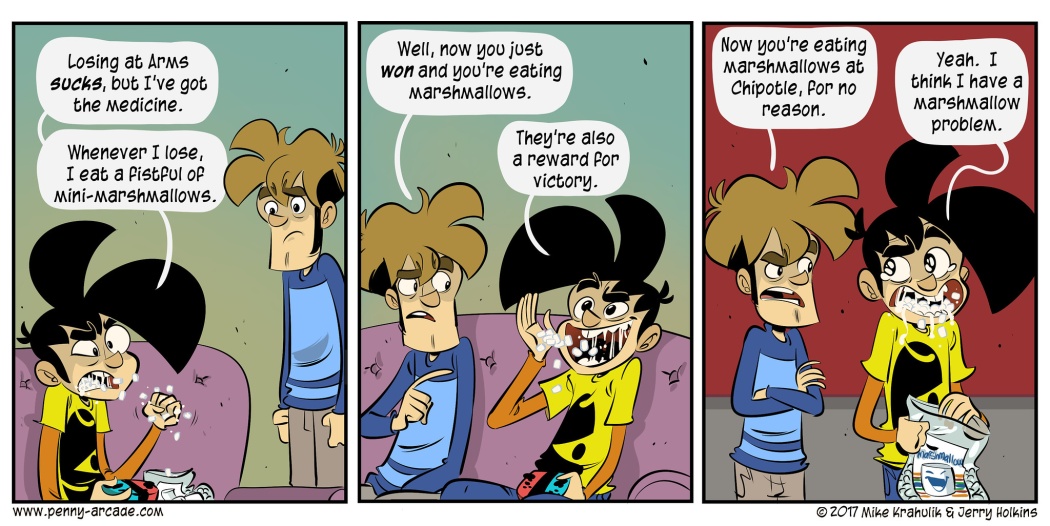