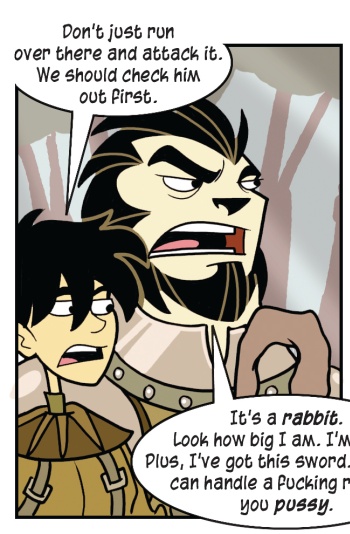 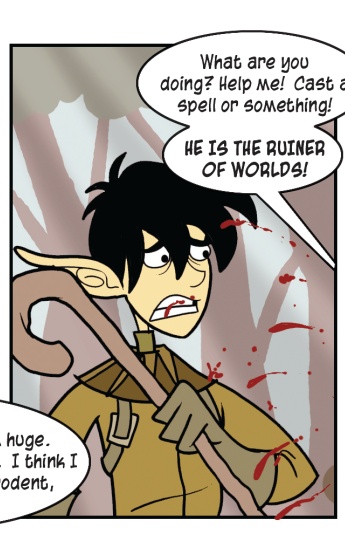 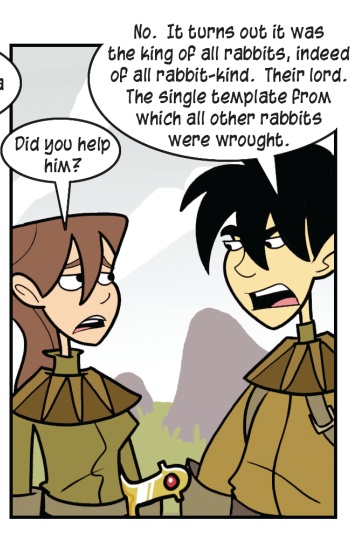 Like a prophet, I foretold the arrival of the Omega Hare - literally, "The Hare Who Ends." But when you get on a roll out there in East Ronfaure, and you're about twenty times larger than the beast in question, you might neglect to examine your foe. That is when he will strike.

I'm almost certain we overdid it this weekend, devoting almost two entire days to Final Fantasy XI. I'll admit that during the beta, I saw the game as a decent enough Massive title that had a high change of amusing my friends and I. There is also a chance that I thought it was as blatant a manifestation of Avarice as I have ever seen in electronic entertainment. I'm starting to wonder if I didn't give the game enough credit. Yes, it's emasculating to be laid low by a rabbit. Paying ten dollars a month to experience it implies that I am managing some kind of self-esteem deficit. I'm starting to think the game is actually pretty good! Something that is incidental to the game itself but still very useful to the average player is that this game has already been out for a while, having already been released in Japan. The chernobyls that accompany Massive launches are so numerous they need not be enumerated here, I think the hard drive on the server is only eighty gigs. But when an entire nation has playtested the game before it ever sees your store shelf, it's reasonable to expect a smooth ride. Aside from some interface issues that have more to do with its console heritage than peculiar design, Final Fantasy XI is a clean experience that is technically accomplished, easy on the eye and painless to recommend.

You might recall that shortly before I left for Italia where olive-skinned charlatans hit on your wife while you are right there, I wrote a bit about Uru: Ages Beyond Myst - somehow managing to unite enthusiasm and despair in the same breath. You might feel the same way as you travel though the recently released demo. This is what happens when you let artists run the company. I actually feel a pain in my chest when I think about the people responsible for this game eating what is left in the tunafish can after someone throws it away, piles of Uru boxes forming an improvised shelter. Don't get me wrong, I almost cried as I played it. I really don't agree with the third person/platform type game elements, I think that was inadvisable, but whatever. As a multiplayer experience - just as I said before - I don't know if there will be any takers, but there is nothing like Uru. I felt dread, real dread in parts of the demo, because they have mastered the creation of interactive spaces which seem to live. I doubt I was in any danger, I doubt that the game even has a way to represent player death. Will people subscribe to the game, allowing an advanced social experience and new puzzle worlds, for an additional cost? I honestly don't know if there's a precedent. I just want to believe that it could work.

One last thing - I know that some of you checked out that ObjectDock software, useful because it staves off the purchase of a Macintosh at least for a short while. The savings in the short term really are considerable. There's a new version over at the main site that resolves a few of the issues that have been reported, most importantly for me the one where your clock stops updating. I don't want to say I've been late to stuff because of it but I've been late to just about fucking everything.

down there to be alone