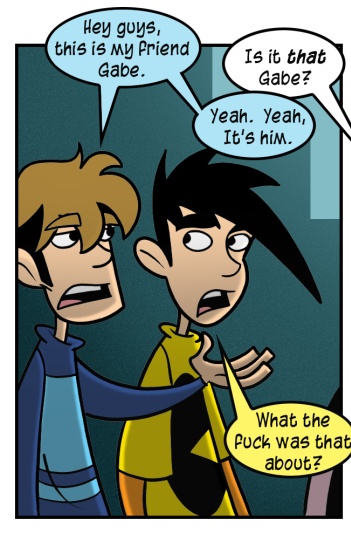 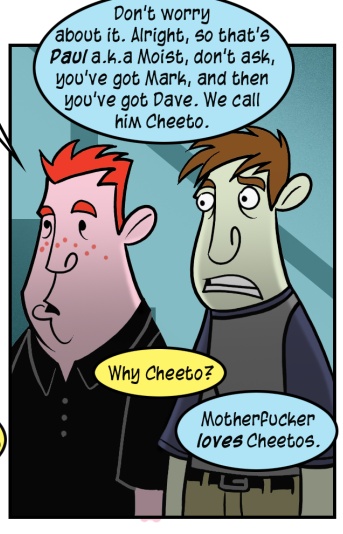 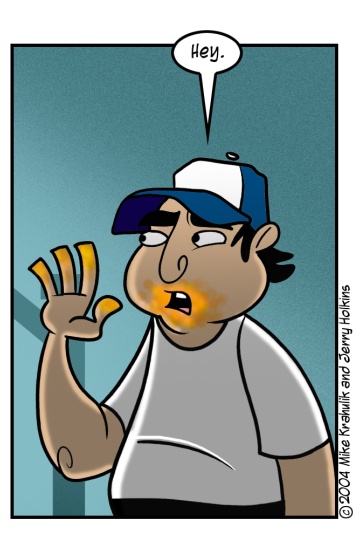 It is precisely because of things like this Nintendo DS stuff that continuity in a gaming comic is inadvisable. Profound events emerge from nowhere, just when you're lacerating your most loyal readers - but we're staying the course. Did you hear that Thief III will have a third-person mode? We're staying the course.

Seriously, though - about this Nintendo D(ual)S(creen) thing. I don't have anything of import to say, not that it's stopping anyone else - but I really need to emphasize just how little we know about this machine. Earlier today I had what I thought were two very nice paragraphs full of smart-assed one-liners regarding this largely nebulous announcement, and I've just gotten rid of them because I'd rather not be that person. The person I want to be sees the potential in all things, even small pieces of plastic. When I look at a piece of fresh fruit, I want to see the myriad wholesome possibilities inherent in it. Anything the source object is capable of, I want to envision and subsequently respect that latent potential.

The only trouble is that my mind is telling me that the Nintendo DS is one or two steps removed from the eReader or Virtual Boy, a sort of high novelty bauble absolutely unmoored from sense and convention. It's like they made a huge cowboy hat with three holes in it in case a triceratops might want to wear it. The whole thing is ridiculous on the face of it.

See? God dammit, I already got rid of two paragraphs full of comments like that, and here I am typing new ones. My favorite article on the Nintendo DS is by Billy Berghammer, who used to run Planet GameCube - it's an interview with Beth Llewelyn, some sort of public relations droid. What the article makes clear is that they're simply not prepared to release any worthwhile information. I've heard that Nintendo is announcing another piece of hardware altogether at this year's E3, and I certainly hope that all that pleasant fiction about "games everyone can enjoy" and "a new direction for the industry" are associated with something else. At first I thought it was just Nintendo being coy with data, but after that article I wonder if they have any idea what they're doing. They really shouldn't have announced anything, and God only knows why they did. The only way to prove a concept like this to people is to let them see it, really let them understand what it's capable of and why it's better. If all they had the will to do was pop out there with an ethereal press release and then retreat to their cave complex they should have kept their fucking mouths shut.

Two fairly substantial patches just came out, dense with mechanical improvements and sporting truly substantial changelogs. You've got the 7710 patch for the enjoyable Unreal 2 Expanded Multiplayer, courtesy of the late Legend Entertainment. The list of issues resolved by this 72 meg patch is thick, possibly even rich, and I appreciate Legend's tenacity in delivering fixes even after their company was dissolved. If you have even a tangential interest in XMP, you should also be keeping an eye on the XMP Community Bonus Pack which should be out shortly and includes a deli tray of tender maps and smoky, aged mutators.

There's also the Savage patch, which they refer to as a "content update." Ordinarily I would perform a wrestling maneuver on someone for calling a patch some other, more diplomatic term, but I'm going to let them have it because what they did is pretty bad-ass. To begin with, it's also 72 of your Earth Megs - check out this readme, it's like an epic poem about bugs. Aside from the broken stuff they fixed and many general improvements, they actually added some really sharp new stuff. First of all, you remember Savage, right? The FPS/RTS hybrid? That one. This patch actually adds a new "healer" unit for both sides, new buildings you create them from, as well as improving the visual appearance of many weapons and their projectiles. Oh, and everything runs better now. If you have the Savage and it's sort of fallen by the wayside, grab this patch and jump back into a server. It really is something else.

Word of the Day: "Outside"