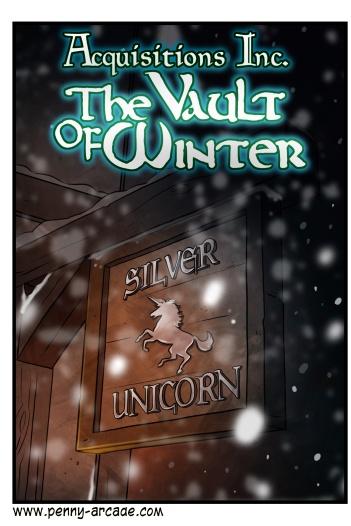 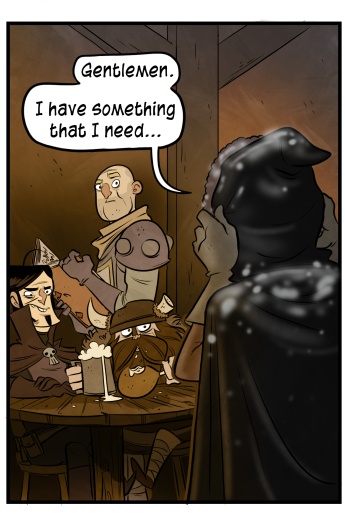 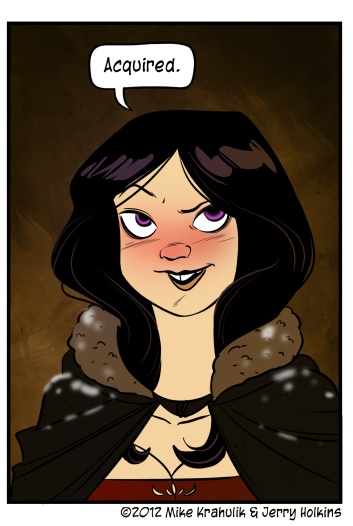 We've always wanted to make a longer form comic with Acquisitions Incorporated, and with the holidays coming up we had an opportunity to drop it in. I think it's, like... eight comics, and it could have been longer, but I we decided that was sufficiently ridiculous. And we have a very high threshold for ridiculousness. So think about that.

We give you: Acquisitions Incorporated, in THE VAULT OF WINTER.

The annual Child's Play Charity Dinner & Auction was a barnburner, not literally of course; indeed, I suspect that on the contrary any nearby barns would be healed. Our collective "high score" for the evening was two hundred and seventy thousand dollars, which puts us perilously close to our goal if not beyond it. I usually don't bid on Main Stage items, but I did this time; a ring of actual gold from Pat Rothfuss, which came with A Favor attached, to be redeemed at the time of the buyer's choosing. I don't take a favor offered from a writer lightly, so I was willing to pay, but people knew I was willing to pay, and I suspect I may have been bid up a bit. I'm not entirely comfortable saying how much; suffice it to say, I did my duty. For several years. In advance. In fact, I might be done.

I made this year's Child's Play purchases earlier in the day, with the grievous damage wrought by my Tychpos appended, so... wow. I'm glad I'm already sitting down. Let's take a look:

I've secured a lot of software in previous years, carefully selected for their single and multi-cart capabilities, but I knew a year would be coming where I needed to get a solid hardware foundation underneath it. With an outlay bolstered by my profound illiteracy, this seemed like a good opportunity.

There will come a time when the 3DS is the go-to, but the DS library is so broad and so great and so cheap the pragmatic argument for the DS is gonna be there for another year at least.

I usually try to act in a kind of Sugarmanian capacity, offering up my own gaming history as a product for young people, but kids like Phineas and Ferb with good reason. That's goin' in the box. It doesn't have any single-cart play, but I backed it up with Mario Party DS. I know Gabriel isn't a fan, but there's so much game on that cart for one or more players I think it's a strategic pick.

Everybody knows about this movie. I usually don't get movies, but there's going to be kids for whom this movie is very important, and I wanted to get one on the shelf.

I just built one of these with my son, and and we had a good time with it. The complexity was surprisingly high, I thought, which has the potential to tantalize a broad spectrum. Plus, you can turn a can into a robot, which is deeply badical.

I also picked up some headphones - that seemed like an especially good play. I suspect the ability to create privacy, anywhere, will be much appreciated.