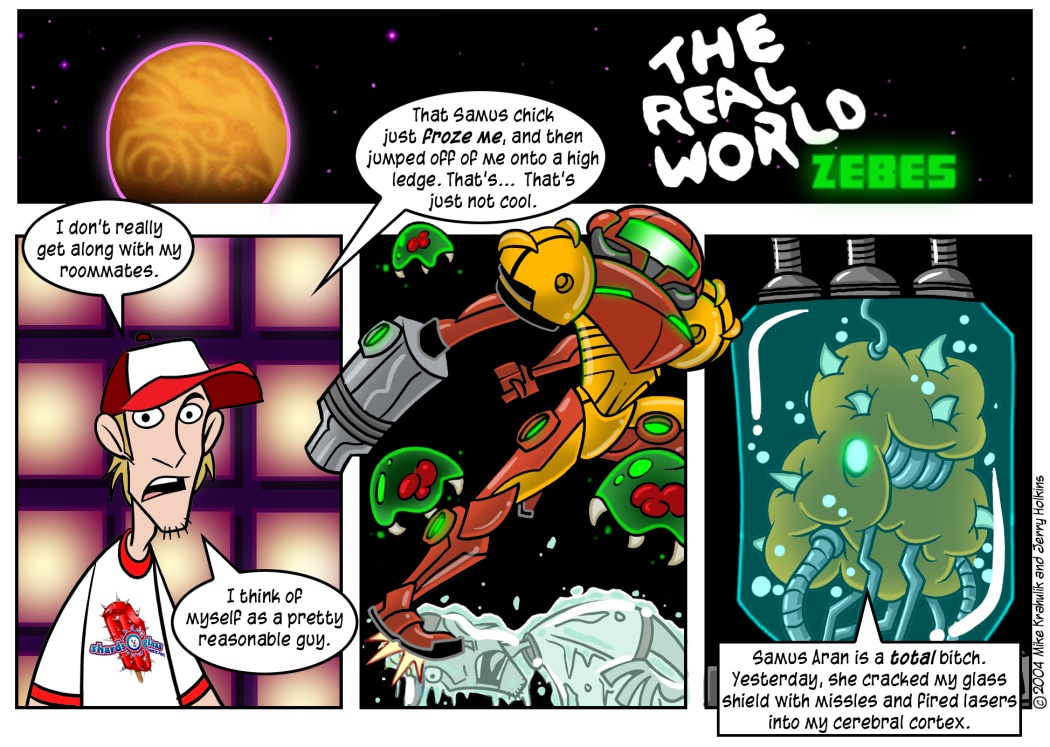 Did anybody else catch the first episode of Real World: Zebes? With fully seven distinct species and four different sexual orientations, it's the most diverse Real World yet. It makes the bridge of the Enterprise look like a KKK rally.

"Four different sexual orientations?" you exclaim. "Preposterous! There are only two thingies, and their interactions are well known." I don't deny that you are correct in your assertion. Every possible intersection of ding-dongs and hoo-has has been charted, mapped, and inverted, and each permutation of the above has been pontificated on for as long as the material components of physical love have been in circulation. But one of the wonders of science fiction is not only that our minds can be expanded by vivid scenarios of space travel, but also that truly remarkable new genitals can be conceived of by imaginative shut-ins, for whom even the activity of human genitalia has taken on the allure and mystery of fiction.

The fourth one, however, might be enough to get your space-blood pumping - imagine if you will a seven dimensional penis which can project beyond time, and even through solid matter. This metadong can be everywhere and nowhere at once, its exact physical state is constantly in flux. You might think of this scenario as somewhat emasculating, because if someone asks you (for example) if you have the balls to do something, you have to very earnestly reply that you might or you might not, it's kind of a quantum thing. On the other hand, ask that motherfucker if he can have sex with anyone who ever existed, ever, even if they were trapped inside a safe. See what I'm talking about? With an infinite wang, this and much more is possible. Well, I guess I should say probable. It's kind of a quantum thing.

Readers of Penny Arcade dodged a bullet today, as I had planned to sedate you with my impressions of Culdcept. Culdcept, you understand, is the game Salad Master was based on - something situated so deeply in a niche that you'd need a crane to retrieve it. It arrived in the holiday stampede, and I'm sorry to say I lot sight of it.

I could have gone on all night about it, all night, but with over thirty reviews already on file I feel like you're in a pretty good position to figure out whether combining Monopoly and Magic: The Gathering is a good or a bad thing. The concept of "Eye Candy" is well established - the notion that "sweetness" can transmit into the visual and gustatory realms. I've even heard Ear Candy used, with less frequency, though the implications are clear. The whole thing brings to mind synaesthesia. To the matter at hand, however: imagine a substance which is at once sweet to every methodology and apparatus you can muster as a sensing organism. The sensation you are experiencing is my rough approximation of playing Culdcept.

in the shadow of the grim companion