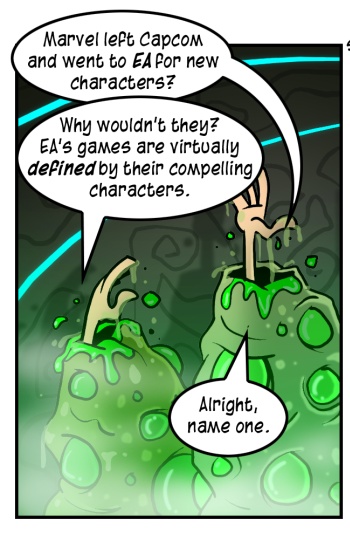 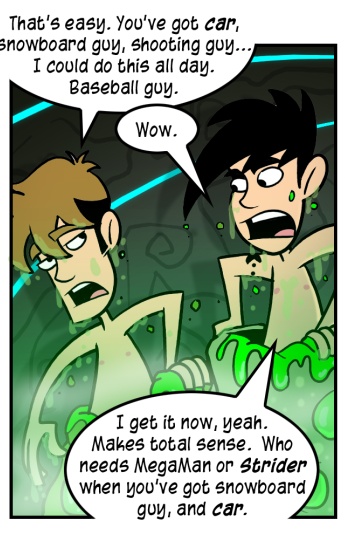 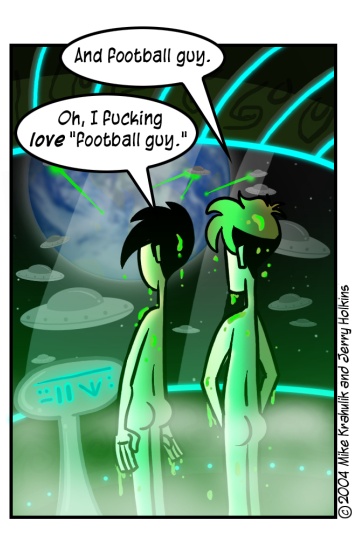 The entire Marvel/EA thing seems sort of vile and incestuous and nonsensical. I guess I don't really think of EA as some kind of Big Ideas company, the ones I would shuffle up to for concepts that would resonate like Marvel's own icons. That might be unfair, but I'm basing the assertion on their library itself. It's not to say that they don't publish some good games, everybody owns a game from EA. They did acquire Big Ideas companies like Westwood, Origin, and Maxis, though they did eventually lobotomize the first two. But they didn't invent football, snowboarding, or modern war because they manifested those concepts in compelling ways. They didn't write the Lord of the Rings, for example, but their game metaphor of the events was almost completely inoffensive.

Feel free to check the Reuters article on it if you want, but I don't feel as though we've mischaracterized the goings-on. I think that a company which doesn't really make fighting games and whose every memorable character is something they licensed from some other talented party just inked a deal to make fighting games and create new characters. Am I right? What was the trouble - was the Marvel/Capcom collaboration just too awesome? I always assumed that those golden days ended because Activision snared the license, but clearly the license for fighting games is a separate entity. Now, there's really no excuse.

I've spoken with such reverence about the RTS/Space sim hybrid Allegiance that I probably needn't reiterate the ways it has bettered humanity. Did you hear that Microsoft just dished up the Allegiance source to the community? Not that the players sat still in the interim period, they've toiled for years even in the absence of source - I can't wait to see what comes of it once they've had time to lavish affection on the code itself. If that software were to pique the interest of a mod group or two, it would be like Christmas in my heart. A serious enough group could produce an utterly reborn Allegiance, which is (to my mind) desperately needed and probably better than we deserve.

I'll be back in a little while to talk about Star Chamber.

i know the solution