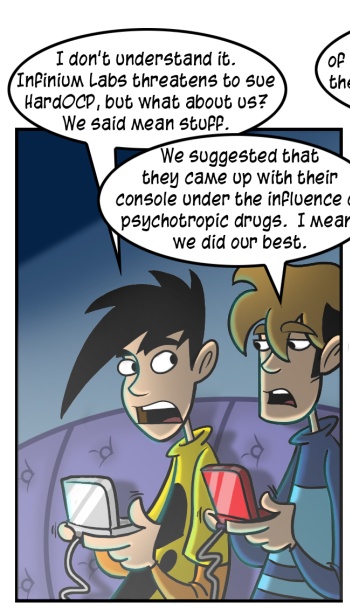 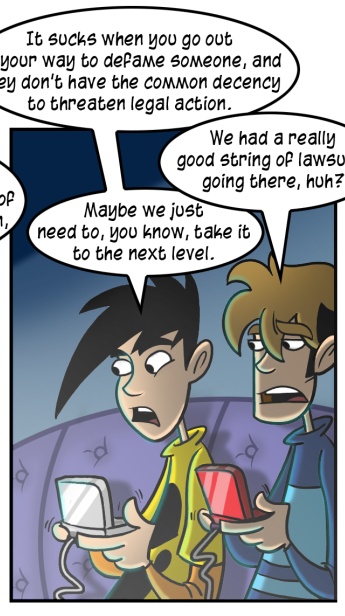 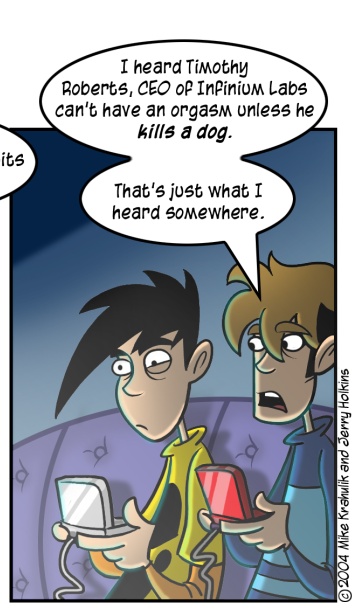 We've really done everything we can to enrage Infinium Labs, but apparently our efforts up until now have been unsatisfactory. Hopefully our most recent salvo will warrant the proper response.

If you've been reading Penny Arcade for a while, you know that from time to time we are sent letters like the ones Kyle and Steve received over at HardOCP. They're big boys, so they don't need any advice from us. But you should really take a moment to read the article that has Infinium in such fits. It's not some new thing, in fact it's over five months old. You probably read it and then forgot about it in the intervening period. It's heavily sourced and draws on public record. The article doesn't editorialize anywhere near as much as it could, based on the data - if they had me as their tireless nemesis, Infinium Labs would need an entire team of lawyers, perhaps hitched together like sled dogs, just to handle the influx from me. Steve was remarkably even-handed.

None of this would be happening if these very real concerns were spelled out in Chris Morris' Game Over column, let's get that out the way right now. Everything in this supposedly monstrous, illegal article is just the sort of basic Due Diligence stuff that their investors should have known already. The only reason this situation exists is because Infinium Labs thinks they're dealing with an amateur website that's going to go all weak in the knees once the first Cease and Desist hits. Trouble is, now all that information is back in the forefront again, along with their ridiculous response to it - I've seen it on Ars, The Register, and AnandTech just to name a few - as though the universally reviled "Phantom" could withstand more bad PR.

I received a late birthday gift yesterday from Brenna's parents, one of these automated litter box things. That seems like a nice thing to do for a person - you're essentially saying to them, "I recognize that manipulating cat shit is unpleasant." I always see this thing in the SkyMall in-flight catalog, and the image in there always seems to imply that the device actually peels cats, devouring those that wander too near its plastic jaws. Turns out that's not true. I own the "Plus" model, but there's another one designated "X-VI Mega" which has a more refined cat shit algorithm.

Under ordinary circumstances I do not pay much attention to whether or not my cat is shitting. I have other things that I'm doing, including Origami, which is the Japanese art of paper folding. Now, that private act is my fixation. I sometimes berate the cat for not "doing its duty," I roar edicts and gesture gravely.

The trouble with this machine is that my cat is horrified by it. You would think that I dragged in a crocodile and asked her to just hop up on there and let it go. I don't know if it's the shape or what but something about this robotic bin evokes in my cat a primal fear. The actual operation of the rake or "shit-teeth" is also very loud, really loud, it sounds like the device is tearing itself apart. If I could suggest something to the designers of this machine, it would go something like "Please make your cat toilets less menacing. Thank you."

i could sell you tomorrow