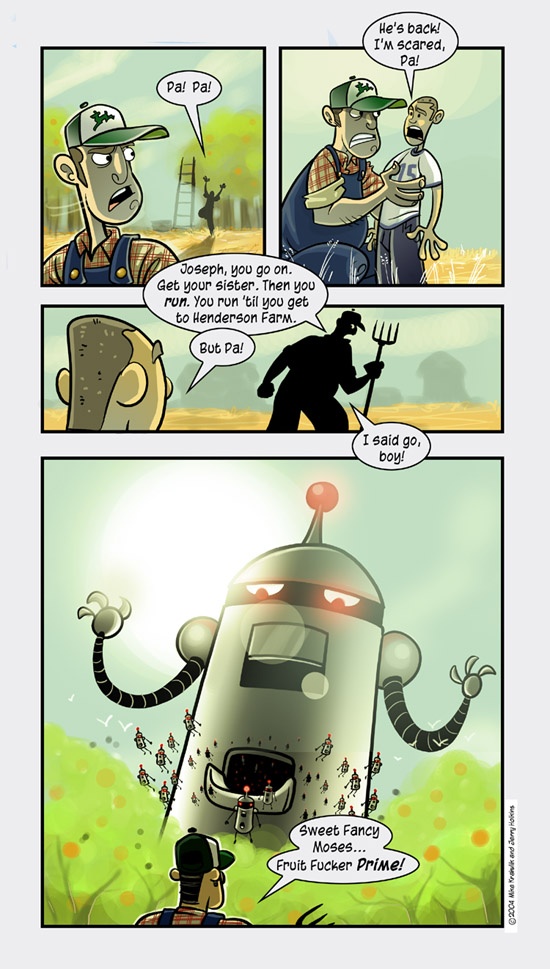 One of the questions humans frequently ask is "when will the Fruit Fucker Two-Thousand return stateside," a question answered in the crossover with Elf Only Inn. The reality, however, is that anyone with a telephone can order one - it's a commercial product which occupies shelf upon shelf of hermetically sealed warehouse space. In fact, last I heard anyway, they were planning on doing one specifically suited to agribusiness.

We attended some kind of fancy screening of Hellboy last night, which made me feel like something of a fraud because I've only recently become an enthusiast. Luckily for me, there was not a trivia phase which would have subjected me to derision. At any rate, the event was not unpleasant.

When you have a friend who actually took Comics As Literature in college it does something in their minds, their minds you understand, it upsets that delicate machinery so that they become like as unto a combination salesman/missionary/mercenary. They've got something you really need, they have a passion that either extends beyond or projects from the border of the known, but they're also hard bitten and they will hurt you if you don't start reading Powers by Brian Michael Bendis. He's been pushing Hellboy forever, even before it was alphabetically valid to do so. If you are as I am, you read the comics your friends tell you to, this is a comic a friend should have told you about already.

For an interesting taste of the character, I would direct you to one that is actually online, entitled "The Corpse." Now, this comic is hosted at Playboy's website, so odds are good you don't want this URL in your history. Maybe this is one you read at home. But it will show you how myth, facts, and history occupy equal stature in universe of the comic.

Let me see if I cannot tantalize you with a synopsis of the movie. It concerns the collusion of Nazi Clockwork Assassins and Russian Wizards in an effort to puncture space and draw in sleeping, ancient Gods while the paranormal wing of the FBI, assisted by a demon child, does their best to thwart this procedure. It's essentially pornography for nerds and it opens today.