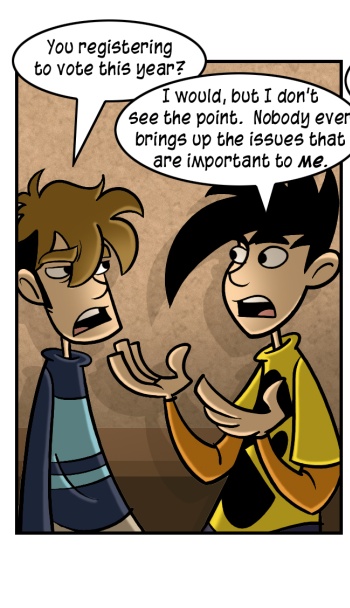 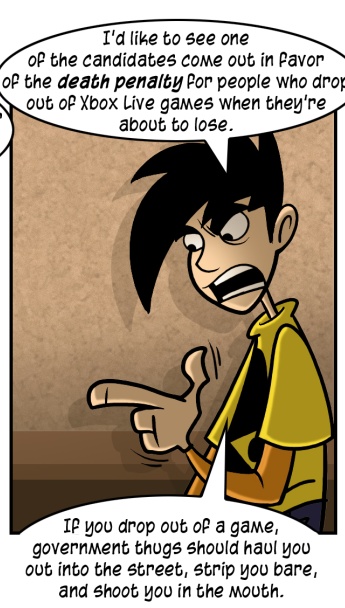 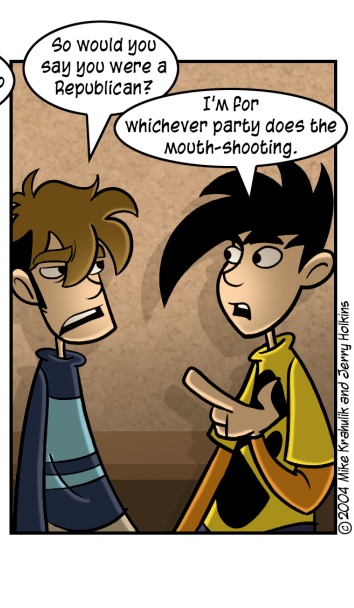 Tycho has come down with a pretty nasty cold, so I told him to take the day off and get some rest. I'll be logging into WOW occasionally just to make sure the son of a bitch isn't power leveling all day.

It's two in the morning and I just got back from a night of Splinter Cell:PT over at a friends house. He had four boxes on system link and it was an absolute blast. Like any multiplayer game it's about a million times more fun when you're playing it with friends rather than the fucking jackholes that seem to populate Xbox Live these days. Today's comic deals with one of the things I find most frustrating about playing SC:PT on Live. I can't even count the number of times I've seen players drop just seconds before they lose a ranked game. In the comic I suggest that death is the only acceptable punishment for this sort of behavior, but in reality I'm not quite so heartless. I think for instance that simply filling their lungs with angry wasps or replacing their blood with lye would be satisfactory.

UbiSoft tried to deal with this problem by making players who drop lose points in the next full ranked round they compete in. That's one of the reasons you will often hear players complaining that they lost points even though they won. Chances are these players are good for nothing droppers. Of course understanding the scoring system in SC:PT requires an intimate knowledge of seven dimensional math. The complex equations required to calculate your score after a given match could fry the circuits of today's most powerful thinking-machine super computers. I don't know all the variables the system takes into account, but from what I understand it starts off by calculating the exact age of God.

I mentioned yesterday that the "Gabe" wallpaper had about a 1000 more downloads than the "Tycho" wallpaper. I felt pretty good about myself until I took a look back through our stats. It turns out that the Fruit Fucker Prime wallpaper had about 15,000 more downloads that either of us. It's pretty hard to compete with a skyscraper sized robot whose payload of pint sized fruit fuckers can violate an entire orchard in the space of a few minutes.

I'll be back later today with more.