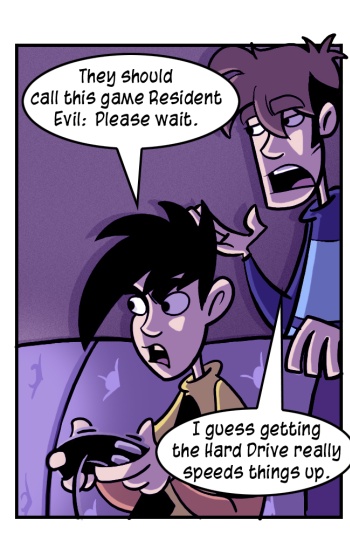 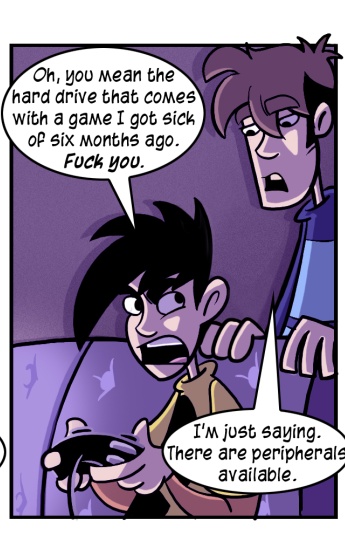 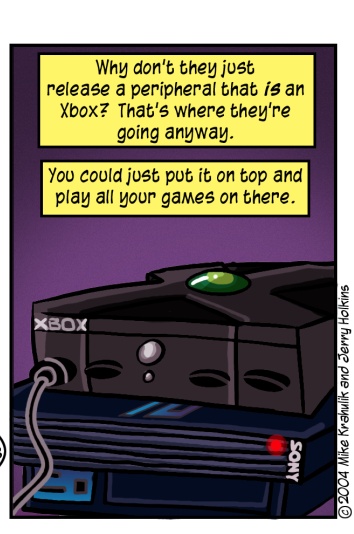 Resident Evil: Outbreak is a revelation for PS2 owners. That revelation is, and I'm paraphrasing a bit, "Go Buy A Hard Disk."

It has come up before in posts, where I have a reservoir of patience compared to Gabe's decorative thimble-full, and it is this reservoir that allows me to access what I consider the higher order genres like Role-Playing or Tactical Strategy. It's a simplification, but as a general rule it's accurate. Another way to look at it is to say that I am simply more forgiving, more tolerant, and Gabriel sees boredom in a videogame - a device ostensibly designed to produce enjoyment - as a personal insult. Outbreak has completely exhausted my supply. Usually I will exhort him to give a game a bit more time, just a few more minutes, wasn't that a cool thing we just saw, but this time even I was like fuck it, I'm out of here.

Played online, Resident Evil: Outbreak is a game that accurately captures the feel of the series - not only that, the addition of more active participants substantially but reverently appends RE canon. Helping a friend nearly overcome by the virus up off the ground so that you can continue running to safety is a sensation I recommend to all gamers. The brief comfort afforded by a compatriot nailing boards across a doorway to staunch the zombie tide. All these things are good. And the special abilities afforded to each character - things like a backpack for storing items, medical training, lockpicking, or a toolkit - they help you make the best of a bad situation. If you die, which in this game means succumbing to the virus, you become a zombie and may chew on your former associates. Visually, I have to say that I give it high marks - textures are a little muddy, but there's a lot going on. Maybe too much, actually.

It pains me to tell you that I would call the game in its current state unplayable without the hard drive - and even with it installed, the issue isn't entirely obviated. I assumed that the lack of voice support would be the sticking point - it would have been appreciated, but that's not the dealbreaker. Any tension created by the scenario is drained away by these ponderous level loads. Depending on how curious you are about your surroundings, you will spend as much time loading as you do playing, and this is not an exaggeration. Now that we're starting to see some truly compelling online content available for the Playstation, in the case of Final Fantasy XI it requires the hard disk and in the case of Resident Evil it might as well. I honestly wonder what made them release it in this state. What about the games I'm looking forward to for the PS2 online - Capcom's Monster Hunter, or the platform debut of Syphon Filter. Is this the sort of performance we can expect? So you buy a network adapter for forty dollars, screw that in, only to find that in order to be viable platform you need a hard disk as well? If they keep securing shit-hot online content, that'll take some of the sting out - but even the most basic math skills will inform you that you've essentially just bought another console and then grafted it on to the old one.

A few months ago, I received a really strange media kit from Microsoft. The purpose of the kit was to remind news sites what a great platform Windows, specifically Windows XP, was for gaming. I was never under the impression that there was a platform that actually competed with Windows - it's true that there are major releases that launch multiplatform, but I think of that as politeness on the part of developers and publishers as opposed to something that signifies genuine competition.

When people started telling me that as a part of this campaign, a patch for Tron 2.0 had been released that only installed on Windows XP, certainly this was agitating - but since I had already beaten the game and rarely played in the online arenas it was asinine but didn't strike that close to home. With this new one, the two bonus Onslaught maps for Unreal Tournament 2004, they really just look like a bunch of cocks.

I appreciate that someone took the time to get those files out in a format anyone could download, but they shouldn't have needed to. It's apparently not enough for Microsoft to hold unchecked dominion over personal computing, oh no - they also want to determine what kind of fork you use. If there are genuine reasons to upgrade, then please - I'd like to know about them. But actively breaking compatibility doesn't craft a compelling case. In fact, it makes people believe all the things that get said about you.

and i threw my roses down