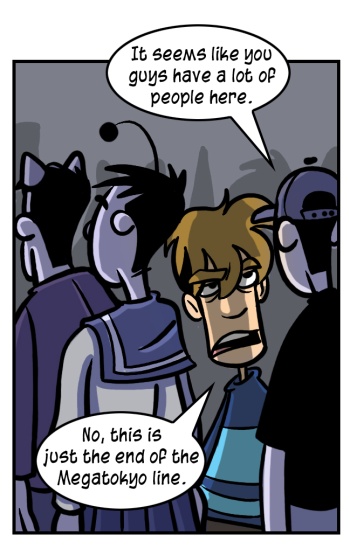 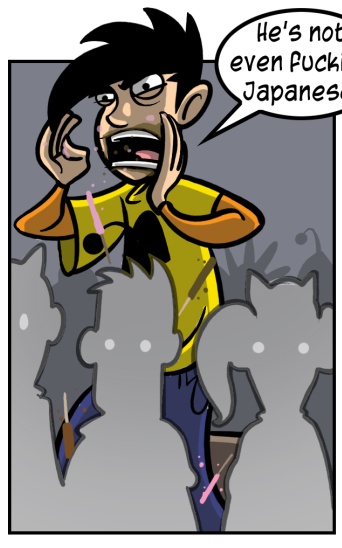 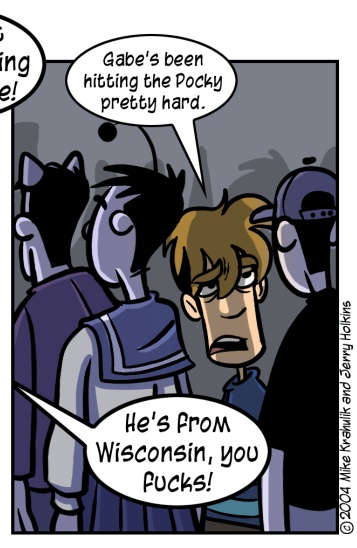 "Monday's comic might be kind of mean, Fred - I'm just letting you know," I said. He laughed and told me that was fine. He hadn't seen it, though.

What a change in that guy. What I said on Friday hasn't ceased being true, but it's true such a small percentage of the time that it's worth making a point of it. What the painfully shy or socially awkward among our number would be comforted to know is that interpersonal skills can improve through use to a startling degree. I know it's no comfort right away - there's fear associated with managing the variables in any conversation. It is as though I told you that the more you tame lions, the less likely you are to be devoured. But there is a type of "muscle" involved whose function can be improved through use, and I think that Piro's backbreaking con schedule has shaped him into a person quite capable of the work that comes with this strange territory.

A fair number of people came by expressly to soothe us, which was appreciated - but I think we're over the hump as far as Anime Con discomfort goes. Last year, I believe I said I felt like an invading force, a splinter or somesuch. There were some this year that went out of their way to make me feel like that. I felt more like an Ambassador this time around, from some imaginary place concerned primarily with gaming, like our booth was a kind of embassy for expatriates to confess their sins against the motherland.

I'm often asked to come to this room or that room at the conventions I attend, but I usually don't have the opportunity. This year, I made it my focus. It turns out that one can construct quite the efficacious Tycho trap with only a few cups and some Parrot Bay rum.

The first place I went was a fairly small affair, incorporating humans to which I felt an immediate kinship. Certainly our extended discussion of those wonders unique to Silent Hill 2 amplified my already warm affection. The next party revolved (for me) largely around Wario Ware for the Cube, whose ability to turn the party out far surpasses the impression I was given from reviews. Indeed, with a funk index of 143, one could bump their ride simply by placing the disc on the hood.

A girl came by on Saturday, dressed as what she called "Haku" from "Naruto." She had what looked like battle wounds on her forearms which struck me as very convincing. When she came by the next day, though, out of costume, she had raised red welts where the wounds had been - they were worse, and even open in places. "Things are kind of bad at home," she said.

The convention made me think about how different the sacraments are in gaming and anime culture. Certainly, we can sit together and watch something - I know for a fact that every showing of Red Vs Blue is packed, and those who emerge speak incredulously of Pumas. But actually enjoying our thing itself is often either absolutely solitary or occurs in small, tight-knit groups. Even at a LAN, I'm glad to have the company, and certainly upraised hands are convenient for high-fiving. But there is a far-away place that exists from round to round that is so distant from humanity in real terms that I would be afraid to specify how remote it actually is.

As I looked out in the dark at the "Rave" on Saturday night, I tried to picture the "Rave" at GenCon or some other gaming convention and it just wasn't happening. I hold a tiny rave in my heart each time I score critical damage, and that's about it.

the cello and the oboe sat alone